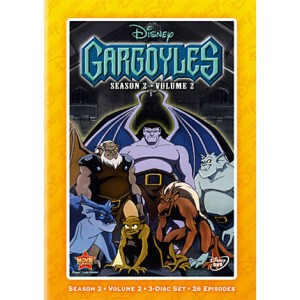 It was a long wait for fans of Disney’s Gargoyles in between DVD releases.  Volume 1 of the second season was released back in 2005 in an attractive three-disc set.  Apparently the sales for the set were not up to Disney’s standards and volume 2 of the set was either pushed back or outright cancelled.  Volume 2 was only recently released this past summer, nearly six years following the release of volume 1 and it was done in a quiet fashion.  Now Disney has its own movie club which it uses as a vehicle for delivering to people DVD sets of their less popular shows as movie club exclusives.  These sets are cheaply done but for fans of the obscure it is currently the only avenue for them to get a physical copy of their beloved programs.  Such was the fate of volume 2 for Gargoyles.  The movie club exclusive contains a minimalist jacket with a gaudy yellow border.  The DVD case itself is like that of a standard DVD with a larger central tab where all three discs are stacked one on top of the other.  The only insert is an ad for the movie club and a number to register the DVD with.  The actual DVDs contain no bonus features of any kind, just the episodes and a mostly ugly DVD menu.  It’s about as bare-bones as it gets, but for fans waiting six years for the episodes, I suppose it’s better than nothing.

The set contains the final 26 episodes for season two.  It starts with the episode “Monsters,” which if one were to look at an official episode list for the show, should have been the final episode of volume 1.  Instead, the episode “Kingdom” was moved to volume 1 for pacing issues with “Monsters” getting pushed back.  That’s because these episodes comprise the World Tour section of season 2 where Goliath, Elisa, Angela, and Bronx are being sent to all parts of the world by the island Avalon for unknown reasons.  As a result, much of season 2 does not include the other characters such as Broadway or even Xanatos.  Often times, Goliath and co. will encounter a villain from back home while on their travels but just as often they’re paired with someone new.  They also encounter many new gargoyles as Goliath gradually learns that gargoyles are alive and well all around the globe. 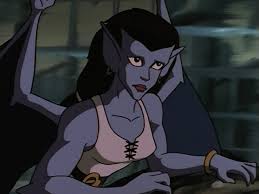 Angela is added as a member of the main cast in the second half of season two and plays an important role in the development of the Goliath character.

Because of the World Tour format, the second half of season 2 is even more episodic than the first half, meaning the episodes function mostly as stand-alone stories.  I suppose one could argue there’s an overall plot since it’s Avalon that is sending them to these destinations, but it’s a fairly loose one.  Having the setting change each episode is an easy way to inject variety into the show, but the format grows stale.  The stories often feel like filler, and as a viewer I just wanted the group to get back home or for Avalon to finally unveil it’s true intentions.  Not all of the episodes follow the Would Tour group, as there are a couple that take place back in Manhattan.  In one such episode, “Pendragon,” the legendary King Arthur and the gargoyle Griff, two individuals encountered by Goliath and co. during their travels, wind up in New York and interact with the remaining members of the Manhattan Clan.  The World Tour basically lasts for 17 additional episodes of volume 2, with the two-part “The Gathering” representing its conclusion.  It’s far too long, and getting through those episodes started to feel like a chore for me (hence why it took me so long to get to reviewing this set) which is never a good feeling for television viewing.

Thankfully, the remaining handful of episodes are pretty interesting, as is the two-part “The Gathering,” though it’s not as grand as some of the series’ other multi-part arcs.  In that story, the god Oberon is attempting to steal the newborn son of Fox and Xanatos for he possesses some unusual abilities for a mortal.  It is interesting to see Xanatos and the gargoyles take on a god, though the resolution felt a little too neat and tidy for my tastes, but I can’t deny the alternative would have worked much better.  We learn some interesting tidbits about some of the supporting characters of the show, which is one of its great strengths.  The writers never miss an opportunity to focus on a secondary character and add importance to it.  As a result, just about any character who ever had even a minor role in a prior story returns at some point, including one background character viewers likely never noticed in “Vendettas.”  This type of writing helps make the show feel more rewarding for loyal viewers and it does add depth to what would otherwise be shallow characters.

The production values for volume 2 are largely the same as that for volume 1, though the DVDs this time around are of a lower quality.  The colors aren’t as rich and sometimes the image can be grainy, but that’s expected considering this was done on the cheap.  There are still episodes where the animation is of a noticeable lower quality, while others more resemble the quality of season one.  The A+ animation is largely reserved for the bigger stories, but even a stand-alone episode here and there (like “Future Tense”) is given a more striking look.  The score remains excellent as well and the voice acting is the usual high quality Disney output.

The alternate future depicted in “Future Tense” is one of the more fun stand-alone episodes in volume 2.

While from an episode quality standpoint I enjoyed this set less than the previous two, there are still some excellent stand-out episodes.  I mentioned “Future Tense” already as being a stand-out in terms of production values, but it’s also a really fun story that looks at an alternate future for Manhattan.  “Sanctuary” is one of the better World Tour episodes as it includes MacBeth, Demona, and Thailog.  Thailog also makes an appearance in another strong episode back in New York, “The Reckoning,” which contains the long anticipated confrontation between Angela and Demona.  The Goliath, Angela, Demona triangle is an anchor in a few stories, and the tension between Goliath and Angela over her lineage is done well.  I don’t think it’s giving away anything to reveal that Angela is the biological daughter of Goliath and Demona, but the writers do a good job of explaining Goliath’s and the clan’s view on children, which is that all gargoyles are children of the clan.  Angela, having been raised by humans, has a human’s perspective when it comes to parents and longs for Goliath to acknowledge her as his daughter.  She has similar feelings towards Demona, though they’re obviously complicated by the fact that Demona isn’t the most likable person/gargoyle.

The Goliath/Elisa relationship is handled quite tastefully by the writers of the show.

Another tension of the series is the obvious affection Goliath and Elisa feel for each other that largely goes unstated between the two.  The conclusion to the set, “Hunter’s Moon,” addresses it for the first time in a very satisfying way.  It’s hard to write such a relationship because it takes care to make it believable that an attractive woman like Elisa would have romantic feelings for Goliath.  The writers sell it well though, and while I’m not sure they could have ever pulled off a full-on romance for the two, they did find a way to get the point across.  That conclusion, by the way, is a three-part story that actually brings everything full-circle for the gargoyles.  It would have been a fine way to end the series, but a thirteen episode season 3 was picked up by ABC for their then Saturday morning block.  Series creator Greg Weisman wrote the premier for that season, dubbed The Goliath Chronicles by ABC, but had no involvement in the remaining twelve episodes.  As a result, they are not considered canon by Weisman and the series actually continued in comic book form years later.  I may look into checking out those comics but I need to know more about them first and if they’re worthwhile.  I’m pretty happy with “Hunter’s Moon” as a conclusion, as I don’t expect a season three set, and I may choose to just leave Gargoyles with how season two ended.

As for this set, it is what it is.  For those who just want the episodes, it’s the only option save for bootlegs that are probably even worse quality.  When it was released last summer, it was available for a short time on eBay through Buena Vista’s store but once those copies were gone the movie club and secondary market were the only options.  The movie club is actually worth looking into for those looking to start a Disney collection.  For those (like me) who already own a ton of Disney DVDs and Blu Rays, it doesn’t make financial sense.  Very quietly though the set moves to the traditional Disney Store website and is available there for twenty bucks.  The secondary market has yet to adjust, it would seem, as the copies are still routinely priced in excess of forty dollars.  Even so, this is likely not going to be produced in large numbers so if you’re a fan of the show it’s probably a good idea to get it while it’s relatively cheap.  Bland set or not, it’s still 26 episodes of a pretty strong show for twenty bucks and if you already have the first two it’s basically a must-have.  Gargoyles is among the elite action cartoons of the 90’s, and for me it ranks among Batman and X-Men as the best of the best.

This entry was posted on Sunday, January 12th, 2014 at 11:19 am and tagged with buena vista, demona, disney, disney afternoon, ed asner, goliath, greg weisman, keith david, xanatos and posted in Television. You can follow any responses to this entry through the RSS 2.0 feed.
« Space Dandy – Live With the Flow, Baby
Ni no Kuni: Wrath of the White Witch »

One response to “Gargoyles: Season 2 – Volume 2”