The Legend of Zelda (The Animated Series) 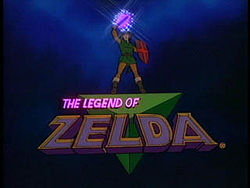 Back in the 1980’s you could not get away from Nintendo.  The Nintendo Entertainment System was flying off store shelves and Super Mario was turned into a household name.  It only made sense that Mario and other Nintendo properties would have a lot of marketing power.  There were toys, pencils, lunch boxes, cereal, soda and so on.  It was Mario Mania!  Not surprisingly, Nintendo licensed the stomper of koopas for television and it wasn’t long before kids were sitting down in front of the tube to watch the Super Mario Bros. Super Show.  Hosted by former WWF personality Captain Lou Albano, as Mario, and Danny Wells (Luigi), the Super Mario Bros. Super Show began with two in a live-action setting before leading into a cartoon.  The live-action segments are probably the best remembered parts of the show because they’re quite absurd by any standard, especially for people who didn’t live through it.  The theme song was also pretty memorable, “The Plumber’s Rap,” and the ending theme “Do the Mario!” has enjoyed a second life on youtube.

The show only ran from September 1989 to December of the same year but since it aired every weekday afternoon it spawned 65 episodes worth of content.  It would be replaced with new Mario cartoons that didn’t feature the live-action segments and were based on later games in the Super Mario Bros. series.  They would be featured with another Nintendo cartoon, Captain N:  The Game Master, as part of the Nintendo Power Hour on Saturday mornings.  Before that though, Mario was on five times a week in live-action form, and four times in cartoon form.  The cartoon was mostly based on the American version of Super Mario Bros. 2 but with some differences.  The creators wisely left out the whole vegetable tossing angle in favor of fire flowers and the antagonist of the series was King Bowser Koopa instead of Wart.  It was basically an adventure type of show where Mario, Luigi, Toad, and the Princess Toadstool would travel to different parts of the Mushroom Kingdom while foiling the schemes of Koopa.  There would often be a musical number and many episodes were parodies of popular movies and stories.  It was a very gimmicky show, like a lot of cartoons from that era, and it’s one that really hasn’t aged that well. 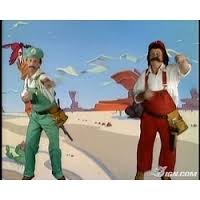 Now the show aired five days a week, but the Super Mario Bros. cartoon only aired four days a week.  That’s because every Friday Mario took a day off and made room for another hero:  Link.  Link, of course, is the hero of the Legend of Zelda games who was also pretty popular at that time.  The Zelda cartoon was different in tone from the Mario one.  Yes, it was still geared towards kids but it shunned a lot of the tired chase sequences and movie parodies that were commonplace in the Mario cartoon.  The show revolves around Link, the hero of Hyrule, as he defends the castle and its coveted Triforce of Wisdom from the forces of the evil sorcerer Ganon.  The show is based off of the first Zelda game with some references made to its sequel as well.  Link is pretty clearly modeled after the character illustrations from those booklets and wields the same dinky little sword he has in Zelda II.  Ganon, on the other hand, looks to be more of a concept.  In both games, he’s pictured as a big green/blue pig who does have some magical powers.  In the show, he has more of a wizardly look with an ugly pig-like face.  He’s actually more menacing looking this way, but he’s not going to get in there and mix things up with Link.  He’d rather stand back and let his minions do the fighting, who are not surprisingly incompetent.  He’s in possession of the Triforce of Power (the show makes no mention of the Triforce of Courage) and has an endless supply of Moblins and Stalfos.

Other characters include a fairy named Spryte, who is likely modeled after the generic fairies from the Zelda games.  She is kind of the Tinker Bell to Link’s Pan in that she likes Link, but he only has eyes for the princess Zelda.  Zelda appears in each episode and is portrayed in a way that probably surprised viewers at the time.  Zelda shuns the traditional princess attire and instead sports trousers and tunic much like Link.  She’s not the typical damsel in distress and seems pretty capable of taking care of herself.  She does have a snotty side, and because she’s the target of many of Ganon’s schemes, she does often require saving from her “hero.” 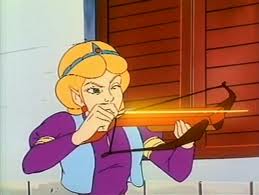 Zelda is not afraid to get her hands dirty.

The portrayal of Link in this series is what many fans dislike about the show most.  Link, in the games, really had no personality.  Even in the modern games, he doesn’t have much of a personality so I don’t know what fans were expecting from the character, it just wasn’t this.  Link is a brash, cocky, and kind of lazy character.  He views his title of “hero” as a job and one that just gets in the way of his pursuit of Zelda.  Not an episode goes by where Link doesn’t beg the princess for a kiss, and because viewers need a reason to tune in, he never gets one.  He’s also been given a catch phrase, “Excuuuuuse me, princess!”  Some day I would like to watch the entire series and count how many times Link says that line (according to Wikipedia, it was 29 times).  The show only produced 13 15-minute Zelda cartoons, but I’m willing to bet that Link easily averaged more than two occurrences of that catch phrase an episode.  Sometimes the line makes sense, and sometimes it’s just shoe-horned into the script.  It even occurs during the opening credits.  Link may have said that stupid line more often than Michelangelo said “Cowabunga” on the TMNT cartoon, on a per episode basis.

Ganon and the two things he covets most.

Anyways, that aside, the show is of a better quality than the Mario cartoons, though that isn’t saying much.  In general, each episode features Ganon executing a new plan to capture the Triforce.  Some of these are more clever and entertaining than others.  There’s one where Ganon goes Robin Hood and to sneak into a magic contest, there’s another where a Zelda clone infiltrates Hyrule, and there’s even a frog prince story-line where Link finds himself the victim of a magic spell (and if you’re wondering, no, Zelda doesn’t break the curse with a kiss).  That said, there isn’t anything in the writing to this show that’s going to impress.  It’s pretty standard fare for the period.  One thing I can appreciate though is the attempt of the writers to explain a few loose ends from the video game.  Namely, how can Link carry so much crap around with him?  Apparently, he has a magic pouch that causes items to shrink down to micro size to fit in.  Throughout the series he and Zelda will often pull out items from the games like the boomerang, bow, and bombs.  Other enemies make appearances too like the octoroks and just about every boss character from the original game.  If you’re watching it to spot items from the game, you’ll have some fun with the show.

Animation wise, the show is mostly crap.  It’s not awful to look at but this is a DiC produced show and DiC liked to put out lots of licensed cartoons on the cheap.  They would get a large amount of cartoons made in a short amount of time so that the shows could go direct to syndication and exist for a few years and bounce around several channels.  I think, on average, the animation here is better than what’s in the Mario cartoons but that’s not saying a whole lot.  The audio is okay though and the Zelda theme is used throughout, which doesn’t hurt it.  Link’s voice, when he’s not saying that regrettable line, is all right.  Ganon is voiced by Len Carlson who should be familiar to fans of 80’s and early 90’s cartoons as he got around.  He uses a shrill voice for Ganon that works for this portrayal of the character.  Zelda is voiced by Cynthia Preston and I always enjoyed her voice.  I don’t really know why but I was drawn to it as a kid.  Maybe because Link sexualized her and I wasn’t accustomed to seeing that in other kid shows of the time.

She’s such a tease.

The Legend of Zelda cartoon is not something that is remembered because it’s a wonderful companion piece to the video games, it’s remembered for nostalgic purposes only and is a kind of humorous reminder of how games were marketed back in the day.  A lot of fans prefer the Zelda themed episodes of Captain N to this show because Link was more of a hero type in that show than he is here.  That show really isn’t any better on the whole as it was just another marketing tool (and all of these old cartoons are basically shunned by Nintendo today) to move video games.  This isn’t a show that most adults can turn on and digest over an hour as it’s pretty damn bad.  It’s kind of funny to laugh at, and I can say I do enjoy it more than the Mario cartoons, but if I didn’t watch it as a kid there’s no way I’m making it thru more than one episode.  The complete series was released by Shout a few years ago and can probably be had on the cheap for those looking to experience it.  Those that have never seen it would probably be better off just watching some clips on the internet as opposed to spending real money on the series.

This entry was posted on Sunday, March 3rd, 2013 at 7:00 pm and tagged with captain lou albano, cynthia preston, do the mario, ganon, link, nintendo, plumber's rap, super mario bros super show, video game cartoons, zelda and posted in Television, Video Games. You can follow any responses to this entry through the RSS 2.0 feed.
« The Legend of Zelda
Zelda II: The Adventure of Link »