In the early to mid 90’s Nintendo was still king.  Sega had carved out a very nice, and in some parts of the world larger, fan-base but Nintendo was still the first word that came mind when video games were brought up.  By the end of the 90’s Sony would establish itself as the new leader of the pack, but that didn’t really weaken the Nintendo brand too much.  At the same time, Squaresoft was killing it with the Final Fantasy franchise and beyond.  When it was announced that Nintendo and Square were working together on a role-playing game expectations could not have been set higher.

That collaboration would give birth to Super Mario RPG: Legend of the Seven Stars, one of the Super Nintendo’s final acts of brilliance.  I, to this day, still feel like I missed out a bit on how great the SNES was.  I had one, like just about everybody.  When I first heard that a Super Nintendo was coming to market I wanted it without ever having seen it.  I didn’t have a subscription to a game magazine or anything, and not many of my friends did either.  I think the first time I saw what the SNES even looked like was at a cousin’s house.  I begged for one but would have to wait a little while until one Christmas where I had my Ralphie moment to find it hidden behind a kitchen chair.  It was awesome, but by next Christmas I wanted a Genesis because it had Mortal Kombat with blood.  Pixelated red stuff was really important to a 9 year old.  I received a Genesis the very next Christmas, one year after I got my SNES.  From there I never received another SNES game.  I think my mother and grandmother (the two most likely to buy me Christmas and birthday presents) assumed the Genesis was superior or something and would just buy me Genesis games.  As a result, most of my SNES play was through rentals or much later on through ports on the Playstation or other means. 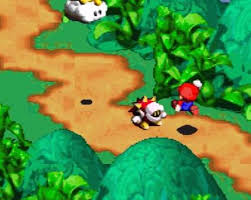 Mario was able to jump and avoid enemies on the "world map" areas. Contact with an enemy would take the player into battle mode.

Super Mario RPG was a game I experienced in a limited fashion when it was first released.  On the surface, it was kind of an absurd title.  Mario, the plumber, in an epic Final Fantasy style adventure?  It had an interesting visual style though, a pseudo 3D engine that kind of looked like claymation, and an isometric 3 quarters perspective.  I rented it with a friend, multiple times I think, though we understandably could never beat it in one night.  I had another friend who owned it and showed me the ending since he beat it.  I never thought to borrow it and play through it myself, probably because by then I had a Playstation and was at that age where it didn’t make sense to go backwards from the more powerful console to the lesser.  When emulation started to rise in popularity on the internet I downloaded it and played through it.  And then once the Wii and its Virtual Console came along I downloaded it again and played through it from start to finish, this time seeing everything the game had to offer. 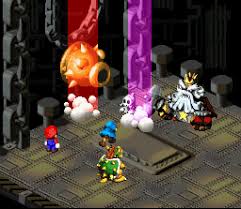 Super Mario RPG is one of those games that’s just plain fun to play.  It would be easy to credit that to the Mario charm but I give most of the credit to Square.  Square could have taken the easy way out and just palette swapped Final Fantasy VI with Nintendo characters and called it a day.  Instead, they took the essence of what made a Mario game a Mario game and incorporated that into an RPG formula.  Mario is the premier platform hero, and Square wisely identified that and incorporated something that’s fundamental in most games into a genre where it’s completely foreign:  the jump button.  Mario could jump, which added a new amount of depth to the world.  Mario traverses a world not completely unlike his usual Nintendo adventures.  As he encounters enemies he can jump on them which brings the game into battle with Mario scoring an early hit.  He also has platforms to traverse and jump across.  These challenges are fairly limited and there’s nothing as challenging as the hardest Super Mario Bros. levels were accustomed to, but it does add to the experience and help make it decidedly “Mario.”

The battle system also received an overhaul to best suit the plumber and his pals.  It’s still turn-based like the majority of RPGs at that time, but it incorporates more button presses.  These commands take the form of either button mashing or timing based.  Hit the attack button at the proper time for just about every attack and the character will score an additional hit up to a certain point.  It’s possible to ignore these extra commands if one is so inclined, but it’s far more rewarding to make use of them.  The more powerful attacks were suitably more difficult to pull off but also more rewarding.  This also worked on defense as well, as characters could avoid taking full damage on some attacks with a well-timed button press.  The game does a good job of changing things up at the right time as well so that just when you’re getting comfortable dodging the para-kooopa’s attack or timing Mario’s mallet strikes just right, a new enemy comes along or a new weapon.

The weapons and skills also have a lot of Mario charm incorporated into them.  Mario has his fire power to make use of and his jump attack.  He can also wield a mallet at times like he did way back in his debut in Donkey Kong.  My favorite weapon is probably Bowser’s chain chomp which he wields like a bolas by spinning it over his head and then tossing it.  Oh yeah, this game also pairs up Mario and Bowser!  Such a pairing would repeat itself, but this is the first time it happened in a game and it was pretty cool.  Not only was it fun to pair Mario and Bowser, but it’s also nice to give Mario a different antagonist.  And since the Princess joins the party as well, this makes Super Mario RPG the rare Mario game where the plumber isn’t out to rescue the Princess from Bowser. 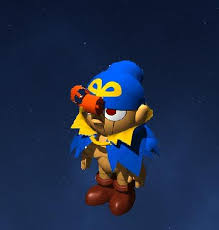 The "star" of Super Mario RPG? Geno certainly was a hit with fans, and many would like to see a return engagement with Mario.

Square would jointly create additional characters with Nintendo to flesh out Mario’s party.  In battle, only 3 characters can be used at once but up to 5 were selectable by the game’s end.  In addition to the 3 mentioned before, Mario was also teamed up with a cloud kid named Mallow (who thinks he’s a frog) and the toy come to life Geno.  Geno has since become a fan-favorite and often comes up whenever a new Smash Bros. game is mentioned as a potential player character.  Despite the fan reaction to him, he’s yet to make another appearance in any Nintendo game.  Square actually holds the copyright on Geno (or at least holds it jointly with Nintendo) which is why he is unlikely to ever surface again as a playable character (he does have an item cameo in Mario & Luigi: Superstar Saga).  The party Mario ends up forming contains the usual assortment of offensive-minded characters, healers, and so on.  It’s nothing too deep, but the variety is solid enough.

If there’s room for improvement it’s with the story-line and difficulty of the game.  It’s standard fare for an RPG to have a big, dramatic plot, which is something Mario has never been known for.  The story here is rather simplistic and not a driving force of the game.  Square wisely interjects humor wherever it can giving this title a different feel from most of the genre.  And considering Nintendo didn’t give Square much to work with in terms of plot depth based on older Super Mario Bros. games, they did a pretty admirable job.  And while the gameplay is complex enough to separate the title from introductory RPGs such as Mystic Quest, it still feels like Square made it as accessible as possible for Nintendo’s audience.  There’s some challenge to the game but nothing crazy.  There’s no point in the game which requires the player to go out and level grind to get through a certain dungeon or any white knuckle boss encounters.  Even the optional, hidden boss Culex (a Final Fantasy themed boss) isn’t very difficult to best.

The game is by no means perfect, but it offered a fun and refreshing take on the RPG genre when it was first released.  The charm of the title was infectious, and it’s approach to battle would show up in both future Nintendo titles and future Squaresoft games.  Because the relationship between the two companies soured shortly after the release of Super Mario RPG, a true sequel has never been created.  Instead fans have received several spiritual sequels in the form of the Paper Mario series and the handheld Mario & Luigi games.  Both franchises borrow heavily from Super Mario RPG, but neither is a copy and paste affair.  For the most part, the humor has been carried over and made an essential part of the game’s story-telling.  Bowser is also rarely the ultimate foe and is sometimes a playable character as well.  Timing based attacks are the norm for the battles and for the most part the games have been a lot of fun.  Turning Mario into an RPG star seemed like a pretty crazy idea in 1996, but it worked out better than probably anyone could have hoped for.  The current games have been fun, but I still think the original Super Mario RPG is the best.

This entry was posted on Sunday, January 29th, 2012 at 10:12 am and tagged with geno, nintendo, rpg, snes, squaresoft and posted in Greatest Games, Video Games. You can follow any responses to this entry through the RSS 2.0 feed.
« Overwhelmed by Games
Requiem for the PSP »