It’s been stated multiple times here at The Nostalgia Spot, but it will be said at least one more time:  the RPG landscape in America was dominated by Squaresoft in the 90’s.  Mostly, it was dominated by one franchise, Final Fantasy.  Ignoring the absurdity of a franchise titled Final Fantasy spawning over a dozen sequels, there seemed to be little room for other games in the RPG genre in America.

Things would change on the Playstation.  Suddenly, gamers were embracing the genre more than the franchise.  This was only a recent development in America, but in Japan gamers were consuming every RPG under the sun.  Enix was perhaps the biggest developer, or it at least had the biggest franchise, Dragon Quest (Dragon Warrior in the US during that time), and Atlus was also around with its Megami Tensei series.  For all of these games to compete they had to do things differently.  American gamers were used to only one kind of RPG at the time, the turn-based medieval type, but other developers were popularizing a different take on that genre.  The developer leading the charge was called Quest, and found a nice niche for itself with the strategy RPG genre popularized by its Ogre Battle franchise.  Ogre Battle was released in small quantities in the US making it very hard to come by.  Those who did play it seemed to enjoy it quite a bit and this small developer was attracting a lot of attention for itself.  When its head developer Yasumi Matsudo left the company, Square was there to scoop him up which lead to the development and release of Final Fantasy Tactics for the Playstation in 1997 (’98 in the US).

Square basically had Matsudo take his critically acclaimed Tactics Ogre game and dress it up with the Final Fantasy franchise.  This wasn’t anything new for Squaresoft as was noted in my write-up on Seiken Densetsu 3, Square loved taking lower profile franchises and slapping the Final Fantasy brand on them to garner more attention and sales.  There are similarities between the traditional Final Fantasy games and Final Fantasy Tactics, making this one branding a little more genuine than some of the others.  Both follow traditional RPG conventions of hit points, magic points, experience points, and so on.  The job system featured in Final Fantasy III and V is also used here with most of the jobs, or classes, being directly lifted from those titles.  There was even a cross-over between Tactics and Final Fantasy VII as users could find Cloud and recruit him to their army.  Later games in the Final Fantasy series would return to the setting of Tactics, most notably Final Fantasy XII. 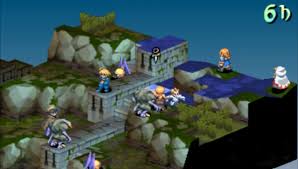 Where things change though is when the player takes control.  In a traditional Final Fantasy, a lot of time is spent roaming the plains, mountains, and other scenery as well as frequenting towns and conversing with the locals.  Tactics cuts all of that stuff out, and instead the player really only moves from one battle to the next.  The other major difference is how those battles unfold.  They’re still turn-based, meaning the characters do not attack one another in real time, only now battles unfold on a grid-based map.  Each character has a speed and movement rating that determines when they attack and how many spaces they can move in a given turn.  In a lot of ways, the gameplay is what happens when one takes a traditional turn-based RPG and combines it with Chess.  Placement of enemies becomes important, as attacks are more deadly from the side or behind as opposed to face to face (Tactics rewards cowardice).  Magic users are particularly frail and should be kept away from direct combat.  Their spells also often strike in a set pattern so players are forced to be careful about how they arrange their units as a bunched up group is more vulnerable to spells.  This also leads to risk VS reward scenarios where you may have to hit one of your units to strike at an enemy with a potentially devastating spell.  Another big change is death, which can be permanent if you aren’t careful.  When a unit falls in battle, the player has a set number of turns to revive the unit before death becomes permanent.  It sucks to lose that character you’ve been building up for hours upon hours.

The job system was wonderfully utilized for this game.  In fact, it’s almost always utilized well but here it’s particularly strong.  A lot of the jobs are interesting and useful, which makes mixing and matching a lot of fun.  Though if there’s one super job it’s definitely the ninja.  Ninjas are perhaps famously over-powered in Tactics.  They’re fast, can dual wield katanas, and have a large range of movement.  Their only downside is they’re fairly weak defensively and start off a bit weak offensively as well.  Invest enough time though and they become a destructive force to be reckoned with.  Early on it’s suicide to send one straight into the fray because of their weak armor rating, but once they can dole out enough damage, it doesn’t matter.  They’ll take out their target in one attack and counter-attack anyone who tries to hit them.  I never tried it, but I bet a team of mostly ninjas could take out most anything. 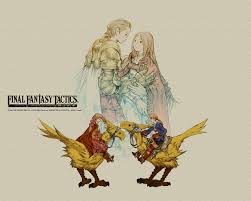 Despite playing very differently, there were some familiar sites in Tactics for Final Fantasy veterans.

That wouldn’t be much fun though, as the other classes are interesting in their own right.  Magic users are particularly lethal, but a challenge to use because their spells take a while to cast.  There’s a lot of trial and error with them as you get used to how long it takes a given spell to charge and then discharge.  The summoners are even tougher to use but can be rewarding if enough time is invested.  There’s also the seemingly weak chemist who’s basically a medic, until you realize they can utilize rifles later in the game and become deadly snipers.  There’s a ton of options for mixing and matching and that’s a big part of the fun.  Beyond the customization options though, the battles are just a blast to play through.  Which is a good thing because they’re not short and sweet like a typical Final Fantasy battle.  A random encounter with some monsters in the woods can take a good 20 minutes to get through, sometimes longer.  There’s a lot that goes into each one and it’s extremely rewarding to see your plan executed to perfection.  It’s also rewarding to see that plan fail and find a way to troubleshoot what your opponent is throwing at you.  Winning with only one unit standing at the end has its own kind of reward when compared with a route.  As a result, “level-grinding” in this game is a lot more interesting than in other Final Fantasy games.

Another aspect of the game many cite as feeling fresh is the plot.  In truth, the gameplay is so engrossing the game could have easily overcome a weak plot (that’s basically what all of the sequels have done) but it manages to turn that into a strong point.  At it’s heart, it depicts two friends on opposite sides of a war; protagonist Ramza, and commoner Delita.  Ramza is of noble birth, and Delita a commoner but they became best friends as kids.  Their world of Ivalice has a strong class system and is in a state of turmoil following its king’s death.  This results in The Lion War, which is the main conflict but through so many twists and turns it becomes muddled.  There’s treachery, deceit, heresy, murder, and everything you can think of.  It’s incredibly dense, so much so that it can become hard to follow.  Most of that is due to the technical limitations of the Playstation.  Long cut scenes full of text can be tiresome to read following a long battle, and the battles are so good sometimes there’s a temptation to just mash the X button to get to the next one.  If one takes the time to really read and digest the story line though it’s quite rewarding and perhaps the best one out of every Final Fantasy game Square has produced.  The original localization kind of stunk though, I’m not sure if future releases have remedied it or not.

Final Fantasy Tactics was released shortly after the mega hit Final Fantasy VII.  It kind of got overlooked, especially because it was so different.  I remember a few of my friends at the time not liking it because it was so different and not what they expected.  That’s the risk a developer takes when it pastes a familiar franchise name onto a different game.   Those that went in with open minds though found something truly engrossing and memorable.  Even though it didn’t move a tremendous amount of units upon release, Sony chose to re-release it as a Greatest Hits title and Square-Enix would later port the game to the PSP as Final Fantasy Tactics: The War of the Lions.  Because so many gamers skipped out on it in 1997-98, it’s become one of those games that has seen its reputation improve with age.  If you’re one of those gamers and enjoy strategy RPG’s, go back and play this one.  The more recent entries in the Tactics series can’t hold a candle to it.