Back in the early 90’s the RPG genre was just starting to take off in America.  The king of the RPG was undoubtedly Squaresoft, often referred to as just Square (and now Square-Enix).  Square’s flagship title was and is the Final Fantasy series and I’ve already made a few posts on that one.  And while I selected Final Fantasy VII as my pick for best of the series, it won’t be appearing in my Greatest Games feature.  Why?  For the same reason you won’t see Ocarina of Time, it’s just been talked about too much.

Now I’m purposely going for obscurity with my picks because that would be dishonest.  I’m going with my favorites of all time and just avoiding a couple of the token titles.  It just so happens that Seiken Densetsu 3 happens to fit the obscure mold.

While Square was carving out a niche with Final Fantasy, Nintendo was smoking the competition with Zelda.  Square’s games usually stuck to the mold of what we now call the Japanese RPG.  Which is to say the gameplay was turn-based, the player attacks and then the CPU attacks.  There were hit points, experience points, magic points, and probably other types of points.  If you’ve ever played a Final Fantasy, Draqon Quest, or even Pokémon game then you know what I’m talking about.  And even though this was Square’s bread and butter it wasn’t the only thing they could pull off.

I don’t know if the original Seiken Densetsu was meant to mimic the original Zelda, but that’s how it felt.  It was released for the Game Boy as a Final Fantasy spin-off because Square felt it’s only chance to succeed was to brand it as a Final Fantasy title.  It wasn’t released in the US until 1998 (as Final Fantasy Adventure) though so by the time American audiences were playing it they didn’t know they had already played its sequel. It’s sequel, was of course, Seiken Densetsu 2 but American audiences know that one better as Secret of Mana.  Secret of Mana was released in 1993 for the Super Nintendo to pretty positive reviews.  It’s a game that still has a loyal following to this day.  I remember Square put some muscle behind this one too with a lot of TV spots advertising it.  It sold fairly well, though it didn’t do huge numbers.  Like its predecessor, it’s an action RPG similar to Zelda.  The player controls one of three heroes at any given time as they traverse the world fighting typical fantasy type enemies.  There was magic, dragons, and an epic tale that was probably hard to follow (I really don’t remember the plot, it’s been awhile) and overall it was a fun package.  As I mentioned, you controlled one of three characters at any given time while the AI controlled the other two.  A friend could even plug in a second controller and take command of one of the unused characters at any time, something Zelda didn’t do.

Secret of Mana is a great game, but I happen to prefer the sequel.  Most people refer to it as Secret of Mana 2, but since it never received a release outside of Japan it was never officially given that title.  I’m not sure why it never saw release in the US.  Certainly the first game did well enough to warrant a sequel, and the new game was received quite well by critics and press alike in the Land of the Rising Sun.  Rumor has it the game had some bugs that Square was concerned about getting past Nintendo of America’s testing.  I’ve never seen reports of the Japanese version having bugs, and never encountered any myself, so that sounds a bit fishy.  I’m thinking it was a cost/benefit issue.  The game was released in September of 1995 and was a pretty big game with an expensive cartridge.  It’s safe to say, that if a full localization was done on the title it wouldn’t have been made available until spring of 1996 which was pretty late in the SNES life cycle.  Square also had a number of other titles in the pipeline and they likely just felt that it didn’t make sense to slip this one in.  It’s tough to say if they made the right decision or not from a commercial standpoint, I certainly could see the game getting a lukewarm reception in the market place.  Creatively though, it’s a shame because American gamers missed out. 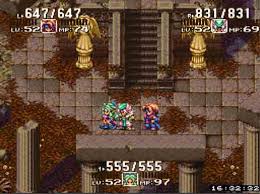 Suffice to say, if you live outside of Japan and want to play this bad boy you have few options.  One is to import it.  You’ll either need a Japanese Super Famicom to play it or you’ll have to rig a Super Nintendo to accept Japanese carts.  There’s also the illegal route which is emulation.  Some devoted fans took the time to translate the game to ROM and released it several years ago.  Don’t ask me where to download it because I have no idea nor do I know if it’s even still widely available.  Needless to say, if you want to play it you’re on your own.

That said, if you do take the time to track down a copy you will be well rewarded.  Secret of Mana 2 plays a lot like the first Secret of Mana.  You still have control of up to 3 characters, you still travel the world in the same manner killing stuff and the magic system is basically the same.  Everything is just bigger.  The first game had 3 playable characters, but the sequel has 6.  You pick which 3 you want right from the start and they’re all worked into the plot of the game.  You start with one main character and then the other two will get introduced.  This means the game’s plot changes a little depending on who you select which adds some replay value.  All of the character’s have their strengths and weaknesses.  Some are melee heavy while others are magic heavy.  In general, the game goes for a 2/2/2 system.  There are two warrior types, Kevin and Duran; two rogue characters, Riesz (Lise in the fan translation) and Hawkeye (Hawk); and two magic users, Charlotte (Carlie) and Angela.  I’ve played through the game with every character, and I prefer the team of Kevin, Hawk, and Angela.  Kevin is a beast-man and has the cool ability to transform into a werewolf at night which earns him lots of style points.  Everyone has their uses though.

The game also added a neat level up system.  At certain levels your character could evolve, kind of like what Pokémon would end up doing, in a chosen way.  The first one let you go in a Light or Dark selection, and then again a second time.  This not only affected how the character looked but also what abilities they learned.  You had four possible outcomes for each one, again adding a lot of replay value, and they were pretty balanced.

Mechanically, one of the big changes was in the combat system.  In Secret of Mana, your character could charge their attack to unleash better moves.  In this one as your character attacked a meter would fill up.  Once full, a special attack could be unleashed.  These attacks were much flashier than the ones in Secret of Mana though the overall mechanic was slightly less strategic.  Battles do get repetitive at times, especially because enemies re-spawn after you leave and return to a screen, though the night and day cycle livens things up a bit.

Visually the game is quite nice to look at.  It’s a step up from the first and I’ve always loved the SNES sprites.  There’s a nice color palette as well and the magic effects provide some flair.  Even today, this one still is pretty nice to look at (if you grew up on these kind of games, not sure what the younger crowd thinks).  The boss battles are numerous and lively and present a nice challenge.  I honestly don’t remember much of the game’s plot, but I don’t recall it being bad so I guess that’s a plus. 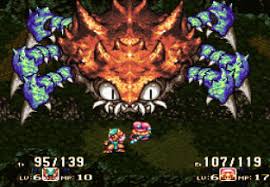 This one is still nice to look at 16 years after its release.

Ever since Secret of Mana arrived on US shores the franchise has been supported by Square.  The original Seiken Densetsu was re-made for the Game Boy Advance as Sword of Mana in 2003 and Secret of Mana has seen release on the Wii’s Virtual Console.  Other Mana games have been released for both home consoles and handhelds to varying degrees of success.  For me, none of the newer games have come close to matching Secret of Mana or Secret of Mana 2.  Considering how easy it is to get a game to market these days, either via material or digital means, it’s surprising to me that Square-Enix has never taken the time to localise Seiken Densestsu 3 for a global release.  With how fond of remakes the developer is, it would make sense to dress it up a bit for a release on a handheld at least.  It seems like every Final Fantasy game has been released 2 or 3 times at this point, how about showing some love for Secret of Mana 2?

I’m glad I got to play through it, multiple times at that, as I’ve stopped holding my breath for a true release.  As far as 16-bit action/adventure titles go, this one is right up there with A Link to the Past.  If you get the chance, check it out.

This entry was posted on Tuesday, December 20th, 2011 at 10:14 pm and posted in Greatest Games, Video Games. You can follow any responses to this entry through the RSS 2.0 feed.
« Ambassadors Get Advanced
2012 and Beyond! »