Danzig III: How the Gods Kill On the eve of the second of four shows in the Danzig “Legacy” tour, it seems like an appropriate time for the last review of the original four Danzig albums from the Def American days.

The third full length album for Danzig would mark a turning point.  The first two albums had been fairly rock-oriented but Danzig III would bring back some of that metallic edge found in Glenn Danzig’s previous band, Samhain.  Danzig III: How the Gods Kill arrived in 1992 to little fanfare, but the band was on the verge of breaking out.  Mostly ignored by MTV due to the band’s “satanic” imagery, Danzig would break thru the network’s censors with the first video from the album, “Dirty Black Summer.”  Soon the band found themselves as guests for shows like Headbanger’s Ball and things started to pick up commercially as well, culminating in a massive Halloween show at Irvine Meadows that same year.

The band would hit its commercial peak following the release of the follow-up EP, Thrall-Demonsweatlive, but Danzig III is the album that got everything rolling and has become a favorite for many fans of the band.  The album was also the first for the band to receive a special release.  The album was released as a box set with a VHS of the video for the title track.  The box itself contained the full cover image done by H.R. Giger, a modified version of his piece Master and Margarita.  Fans could also purchase their own Danzig dagger from the fan club via mail order which has since become an expensive collector’s item. 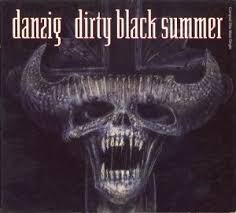 The cover of the “Dirty Black Summer” single with the Giger interpretation of the Danzig classic skull logo.

The third Danzig album is the first album with the label where Glenn and the boys had almost total control.  Glenn Danzig had received a producer credit for Danzig II along with Rick Rubin, and though Rubin would receive one for Danzig III as well, it has long been stated by Glenn that by this time Rubin had little involvement with the band.  That is evident in the sound of the album.  Rubin is famous for taking bands and stripping them down to a very basic sound which is what he did with the band’s debut album.  Danzig II added more blues elements and the band flexed its creative muscle a bit more with songs like “Blood & Tears” and “Pain in the World.”  Danzig III would keep some of that blues base but add a heavier production.

This is quite apparent in the album’s opener, “Godless,” a dark and foreboding track with an explosive center.  Danzig sings in a throatier voice this time around achieving a deeper sound.  The guitars have crunch, but the tone lightens when the time comes for guitarist John Christ to shred.  This more visceral style probably isn’t what suits a technical player like Christ best, but he pulls it off just fine.  Eerie’s bass is actually audible on most tracks this time around, as opposed to just a few like with the previous two albums, which helps contribute to the album’s forceful low-end.

The first single, the previously mentioned “Dirty Black Summer,” was a good choice as it’s probably the most accessible song.  It’s a blues-rock number where Glenn’s evil croons take center stage.  The vocal hiccup between lines in the chorus gives it a unique quality, though the silly subject matter makes it a bit tough to take serious at times.  The thunderous “Left Hand Black” may be the album’s heaviest moment and its rebellious chorus an easy crowd pleaser.

The standout tracks are the title track and the ballad, “Sistinas.”  The title track effectively uses the old trick of start quiet and build to an explosive chorus before slowing things down for the outro.  It begins with a nice piano melody and some soft singing by Glenn.  When the song gets bigger the guitars come in with pinch harmonics in excess.  Despite the simple approach, the song is quite effective and a great high point.  In contrast, “Sistinas” starts quiet and remains so.  Danzig croons away like a modern-day Elvis with some desperate, uncharacteristic lyrics.  It’s so good it’s the type of sappy ballad even a metal-head can get into.

That said, the album isn’t perfect.  “When the Dying Calls” is one of the band’s weaker closing numbers for an album and “Do You Wear The Mark?” is a shameless rip-off of Black Sabbath’s “Into the Void.”  Glenn really stretches his vocal chords for “Bodies,” and the result is something between okay and annoying and “Heart of the Devil” has some lyrics that are almost too campy to ignore.  Glenn Danzig has always walked the line between campy and cool and every now and then he strays a little too far to one side.

Danzig III – How the Gods Kill may have its flaws, but it’s an album that’s definitely worthy of one’s attention.  The good far outweighs the bad and while it’s not among my favorite Danzig releases, it’s in the next tier of very good along with the likes of the first record and the most recent, Deth Red Sabaoth.  Because this is the point in the band’s life where a lot of fans hopped on board, it holds a special place for many so I can see why it often is cited as the group’s best effort.  I have to respectfully disagree, but I have listened to this album a great many times, and plan to continue to do so.

One response to “Danzig III: How the Gods Kill”