There was a period of time, probably begun somewhere in the 80’s and carried through all or most of the 90’s, where arguably the most popular character in comics was Wolverine. While the big franchises like Batman and Superman faded from the public spotlight and before Spider-Man broke through to the mainstream, Wolverine was featured all across Marvel and his likeness plastered everywhere comic books were featured.  True he never quite burst through the way the previously mentioned heroes either did or would to the point where any person walking the streets of America could identify him, but he came close.

For my generation, he was probably the most popular superhero of my youth.  I find it curious that he came to occupy such a place.  Wolverine couldn’t fly, stick to walls, or shoot lasers out of his eyes.  He wasn’t a vigilante out fighting for justice like many other heroes, didn’t have an alter-ego, or a ton of money.  He’s a guy with blades extending from his fists.  Sure he’s more complex than that, but show someone an image of Wolverine and that’s what they see.  They don’t know about the regenerative capabilities, the bad ass nature, the unbreakable skeleton.  They just see a guy in brightly colored spandex with some knives attached to his gloves.

Originally, that’s all Wolverine really was.  Debuting in the pages of The Incredible Hulk, Wolverine was a pest the Hulk had to deal with.  Sporting yellow and blue, he came at the Hulk with some savagery but ultimately was bested.  Somehow, what probably was intended as a mostly one-off character would find himself re-designed and re-imagined.  The following year, he was brought back only this time to join the X-Men in the infamous Giant Sized issue from 1975.  It wasn’t until here that his character began to develop beyond what the reader had seen.  Eventually he would be revealed as an older guy with a brooding personality unafraid of using lethal means when tackling a villain.  His claws were unbreakable and part of his body, not his gloves, and his origins a mystery to not only his teammates, but himself.  Frank Miller would get a chance to further refine the character in a mini series in the early 1980’s.  His portrayal of Wolverine was so popular that a lot of the characteristics he brought to the table would find themselves in his future Batman books.  Soon every superhero was a brooding anti-hero prone to moments of violence.

It’s rather amazing that this character’s humble beginnings could lead this far.  Surely creators Len Wein and John Romita Sr. never envisioned he’d end up this big, but Wolverine would become an example of how good character development is paramount in comic books.  The powers and abilities of a super hero are often times the focus, but a cool power or even a cool costume can only take one so far.  Wolverine’s original look was kind of lame.  The whiskers on the mask especially, and were quickly removed for his X-Men appearance.  The mask itself is iconic now, with those big “horns” coming off the eyes the main characteristic.  The colors have changed from time to time, though yellow and blue, and tan and brown, remain his best looks.  I personally prefer the tan and brown John Byrne costume, just because it’s a little less traditional than the yellow and further differentiates him from the rest of the X-Men. 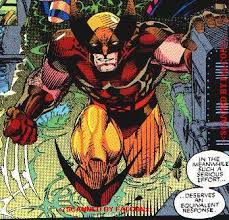 My preferred look for Wolverine.

What probably attracted me to Wolverine at first was his attitude.  My first introduction to the character was through the 1990’s X-Men cartoon (my season 3 posts are coming!) where it was established early on that Wolverine has his own set of rules.  He doesn’t like taking orders, goes where he wants to go, and is even prone to wild mood swings.  He’s also fiercely loyal to his friends and their cause and is sometimes seen in a protector mode, though he’d probably be loathe to admit it.  And even though the censors presented an obvious obstacle, the writers and directors of the show were able to portray him as a savage brawler when provoked.

That’s all well and good, but without something more I doubt I’d have seen Wolverine as anything but a complementary piece to the X-Men.  His back story was what was most intriguing.  The secretive Weapon X project that grafted the unbreakable adamantium to his bones was revealed early on.  After that, it was all a mystery.  Wolverine not only had no idea where he came from, he didn’t even know his own age or what his birth name was.  He went by Logan, though how he came upon that was also a mystery, and was plagued by visions of the past that were either real or imaginary.  He had lots of old foes, some of whom he couldn’t even remember why he hated.  He thinks Sabretooth, for example, killed an old lover but he was never certain.  Tragedy would also prove to be close at his heels at every step, his old lovers often found themselves dead, like the ill-fated Mariko.  And there was his pursuit of teammate Jean Grey, always doomed to fail, but I think most readers were like me and rooted for Wolverine over the dull Cyclops.

Since the 90’s, Wolverine’s origins have mostly been revealed.  I always felt this was a huge mistake and actually have never read the series Wolverine Origins.  He also became way over-exposed leading to a backlash of sorts.  At some point, everyone stopped saying Wolverine was their favorite character and changing their tune, because it wasn’t “cool” to like what everyone liked.  Marvel (and soon Fox) forced him down everyone’s throat and his presence dominated the X-Men books.  In a truly unwise move a few years ago, Marvel even made him leader of the X-Men for a television show titled Wolverine and the X-Men which left many fans gagging.

As for me, Wolverine was never my favorite but I did like him.  I suppose he was my favorite member of the cartoon X-Men, but I’ve always liked him for what he was.  He’s a great addition to an ensemble like the X-Men and serves a vital role.  The other aspects of his origins add depth and were always a good “rainy day” plot device if nothing else was going on in the books or show.  It’s rather unfortunate that modern day writers and business types have forgotten how best to utilize him, especially his rather heroic movie portrayals, but that’s what happens when money is involved.  Wolverine’s success is both unlikely and typical, a product of his times.

One response to “The Wolverine”