Since finishing Mass Effect 2 I have been in video game limbo.  This isn’t anything new or entirely unwelcome, but when I don’t have my attention focused on a narrative I inevitably look towards the horizon and the next thing that will occupy my free time.  There are two games set for release on March 8th that I’ve got my eye on, MLB The Show 2011 and Dragon Age II.  Conveniently enough, both recently had demos released on the Playstation Network and a small portion of my time this weekend was spent checking each one out. 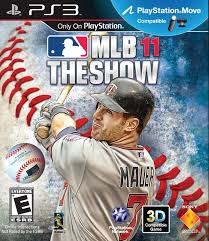 I took last year off when it came to the MLB franchise so I’m kind of eager to get a new one.  Traditionally, whatever MLB game I purchase on an annual basis ends up being a huge part of my spring and summer as I’ve been known to log over 100 hours managing rosters, developing players, and winning championships in a virtual world.  Last year was the first time in a long time that I did not buy a new MLB game.

Despite not playing last year’s game, this year’s version of The Show doesn’t look much different.  The demo is a rematch of last fall’s World Series pitting the Texas Rangers against the San Francisco Giants at the Giants’ home ballpark.  The demo lasts four innings and disables most of the game’s options (including the tutorials, more on that to follow) so that you’re basically just being exposed to the gameplay.  Upon first impression the familiar theme for the franchise is still here and the ballpark looks slightly improved over the 2009 version.  There’s still aliasing issues and once your eyes move past the walls everything looks pretty amateurish  That would be forgivable with most parks but San Fran’s is located right in the bay and some time should have been devoted to at least making the water look like water.

Graphics for a baseball game aren’t really a focal point, and for the most part, the game looks good enough.  The character models look like the actual players and the animations for each batter’s stance are nearly spot-on.  The demo intends to highlight the two biggest additions to this year’s game: analog control.  Traditionally, pitching and hitting are both done primarily with a button press, but this year the developers have moved both actions to the right analog stick.  The problem is, the in game “how to play” menus instruct you to view the tutorials in order to understand how the analog controls work, which as I mentioned before, are not available in the demo.  Why Sony chose to disable to the tutorials is a legitimate question indeed as it is probably a good idea to tell the player how the game is supposed to be played.

Anyways, I was unable to fully grasp how the pitching works, resulting in me throwing numerous wild pitches and even hitting a batter.  I hated my experience with the pitching so much that I gave up and just kept switching sides so I was always controlling the hitting team.  This really didn’t prove much more fun, as the new analog hitting is cumbersome.  You pull back on the stick to “load up” and then push forward to swing.  You direct the location of your swing with the left stick, and the motion feels unnatural.  Also, it takes just a fraction of a second longer to push a stick forward as opposed to pushing a button, which throws off the timing.  As a result, I was often cheating on fastballs and unless a breaking ball was hung I was dead on arrival.

The full version game features the classic controls option, but my experience with the demo was so unsatisfactory that it has all but squashed my excitement for it.  If a demo could be this half-assed and thoughtless it makes me wonder what the quality of the full version game is like.  I’m questioning whether or not I want to bother with it now, so if that was the aim of Sony when they released the demo, good job!

Normally I would brush off such disappointment but considering that Dragon Age II is getting released the same day it makes it tempting to just bypass The Show all together.  The first one, Dragon Age Origins, was a title long in the making that eventually was released in 2009.  Developed by Bioware, it was a spiritual sequel to their Baldur’s Gate franchise and placed the player in a medieval fantasy setting in control of a custom hero and his or her band of followers.  It was a solid first entry for the series though it wasn’t without its flaws.  Visually, it was just average and gameplay wise was pretty much the same as past games, like the previously mentioned Baldur’s Gate and Neverwinter Nights.  To better acclimate it for consoles, the camera was positioned behind the player instead of overhead and commands were issued from a command wheel activated by pressing a trigger.  There were shortcuts for spells and abilities mapped to the face buttons as well as a quick heal option.  It was an admirable attempt but lacked the precision of the PC version.  To reflect this, Bioware made the game more action heavy and the result was an inconsistent difficulty level.  Some dungeons and enemies were a breeze and others frustratingly difficult because micro-managing your squad of four proved cumbersome.

Bioware has set out to remedy this by focusing even more on action for the sequel.  Right off the start, players will notice the main character is more restricted.  In the first game, the player had a choice of 4 classes and several different races to choose from.  In this game you have the choice of three classes; warrior, mage, and rogue.  You can select your gender but are limited to the human race.  That is because Bioware wants to tell a more specific story this time around where as with Origins your experience was different depending on where your character came from.

Regardless of what class you choose, attacks are now done with button inputs.  In the previous games you selected an enemy to attack and your character attacked that enemy until it was either defeated or you input another command.  Now, one press of the X button equates to one attack.  Characters seem to move quicker giving a better sense of control over what happens.  I got the sense that I could actually avoid attacks rather than having everything decided by a behind the scenes calibration.  I don’t know if that sense is illusion or not, but mission accomplished. 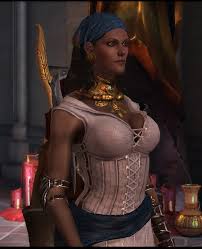 I didn't know they had access to breast implants in the Dragon Age world. Maybe they're magical enhancements?

The demo is suitably long enough to give you a sense of what you’re in for.  After playing an initial scenario, the game thrusts you forward in the game’s plot to let you dabble with more experienced characters.  The tech trees are more robust and leveling up looks like it will offer more options this time around.  The graphics are improved as well and some characters from the first game have received make overs.  The characters are still a bit over the top for my taste though.  Every female has a tiny waste and giant breasts while all of the guys are suitably ripped.  Isabela, returning from Dragon Age Origins as a recruitable character this time around, is especially ridiculous looking.  If I didn’t know better I would assume she was heading off to film a porno, not fight off the dark spawn.

That’s a minor quibble though and something that is prevalent in both video games and comic books.  The game plays better than the first one, which was already an enjoyable experience.  Combine that with Bioware’s gifted story-telling and I’m pretty much ready to embark on my own journey come March 8th.  After playing the first game as a rogue, I think I am going to try the mage this time around.  I enjoyed playing as one in the demo and see no reason to pick a different class.  I did leave it on my hard drive in case I wish to come back and try out one of the other classes.  As for The Show, that has already been deleted.