My choice for my favorite album of all time should come as no surprise to anyone who knows me personally.  I’ve already expressed my admiration for all things Glenn Danzig previously, but this should drive that point home.  It may seem like an odd choice, but this is my list where the only criteria is enjoyment, so deal with it.

Danzig II – Lucifuge is a great record.  I suppose considering that I’m ranking it as the best kind of speaks for itself.  It’s a marriage of hard rock and blues that stands out amongst the Danzig catalog.  Glenn Danzig is a musician that has touched on several genres including rock, metal, industrial, and even classical.  It is perhaps one of Danzig’s greatest strengths that as a listener you know you’re in for a new experience each time he releases a new album.  That’s not to say he hasn’t had his missteps along the way, but Danzig II is not one of them.

Released in 1990 after a solid debut in 1988 on producer Rick Rubin’s newly created Def American label (the first Danzig record was actually Def American’s first ever release), Danzig II was meant to build off the first one and take the band to new heights.  Because of the imagery associated with the band, parent company and distributor Geffen Records refused to have their name appear on any of the releases and the band found airplay hard to come by on both radio and MTV.  There was a lack of buzz at the label as a result, so Ruben took a more hands off approach with the band’s sophomore effort than he did with the first one.  This gave Glenn Danzig almost total control over how the album sounded and it’s easy to hear the difference in approach between this record and its predecessor.

An image from the “Devil’s Plaything” video, perhaps my all time favorite song. When Danzig dusted this one off for the 2008 tour the place went nuts, prompting a remark after the song from Glenn that went something like, “I guess you guys liked that one.”

Rubin went for a stripped down rock approach on the first Danzig LP.  On this one, the direction has never been clearly stated but it seems like Glenn and the boys wanted to introduce some more blues elements.  That influence is most notably felt on the acoustic sing-along “I’m The One,” a throw-back track to the old blues guitar men and early country artists.  There’s still plenty of rock and the album’s opener “Long Way Back From Hell” is a perfect example of that.  It begins with a dive riff that goes into an up-tempo chorus.  Right away, it sounds faster than anything that was present on the debut album.  Danzig’s vocals are in top form as he belts out the chorus and asks the listener if they wish to join him and the band on this devilish voyage.  “Snakes of Christ” slows things down a bit and places Christianity in the band’s crosshairs.  It’s songs like this that helped to earn the album a parental advisory, despite an absence of profane language.

There are quite a few songs with unique sounds on this record for the band.  “Tired of Being Alive” doesn’t quite sound like anything Danzig had done before that or since.  It’s pretty much straight up rock with a real catchy riff.  The chorus features some layered vocals that also was a departure in sound.  “Blood and Tears” was Glenn Danzig’s first real ballad, a quiet number with a big chorus and one of the album’s standout tracks.  “777,” the original title track before Glenn opted for Lucifuge, experiments with melding acoustic guitars with electric ones giving the chorus a real “twangy” sound.  “Pain in the World” is a big Sabbath-like song that has a slow, plodding pace before going into a big, guitar driven outro.  It sounds almost out of place at first, but becomes an acquired taste that gives the album greater variety. 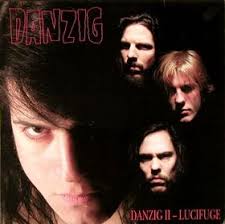 The cover for the LP version, an homage to The Doors.

The album was released across three formats, cassette, CD, and LP, with the CD featuring a different cover than the other two.  The CD booklet on the original release had a neat gimmick where it folded out into the shape of an inverted cross which probably delighted parents across the country.  It was also the album that gave us the classic Danzig logo of a ram skull head mounted on an inverted cross.

For me, Danzig II is sonic perfection.  It features some of Glenn’s best riffs and vocals and all of the songs pack a punch.  The subject matter has become standard fare for Danzig but in 1990 the rebellion and challenges against firmly entrenched institutions was fresh.  A lot of the songs have become staples in the Danzig set-list over the years and it’s cited by many fans as their favorite record.  And for someone with over 30 years in the music industry, such praise should not be taken lightly.

This entry was posted on Sunday, February 27th, 2011 at 7:24 pm and posted in Danzig, Music, Top 10 Albums. You can follow any responses to this entry through the RSS 2.0 feed.
« Baseballs and Dragons
Samhain »