I was in junior high when Tool’s Ænima hit both the airwaves and stores in September of 1996.  Up to that point I was still trying to find my musical identity.  I knew it wasn’t as a fan of pop and hip hop styled music.  I had always gravitated towards rock with some of my early interests being Aerosmith and Guns N’ Roses.  I was also getting into punk rock and was enjoying the likes of Operation Ivy and NOFX.  Tool was different.

I had heard some songs and seen a few videos for Tool before Ænima.  “Sober” and “Prison Sex” were uncommon plays on local rock stations and the band had established a following.  Interestingly, it seems like both of those songs would become more popular with the success of Tool’s third album (though second full-length) Ænima.

My first experience with Ænima was the title track.  It was a modest hit across the airwaves even in its butchered, censored form.  From its opening not quite grunge but not quite metal guitar riff to the tribal drum beats and Maynard’s grunts, it’s a song almost designed to incite a riot.  Mid-way through the tempo changes up and the script the song appeared to be following is abandoned.  This is not a typical radio song.  Maynard lists off the things he despises about the LA culture as the song builds towards its climax.  And just when it builds the listener to a froth it abruptly ends.  I can remember feeling out of breath the first few times I heard the song.  It was like a drug.  And much to my delight, the song Ænima provided just a taste of what was included on the LP.

My best friend would get the album before me and we would listen to it on repeat. 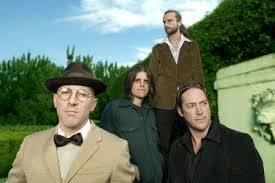 Pretentious, brilliant, and yet unafraid to inject humor into the mix. That's Tool.

We’d laugh as the humorous moments and rock out to the head-banging tracks.  It was not long before I was able to scrounge up enough cash to get my own copy.  Since it’s become a favorite of mine.  I own everything Tool has put out and I don’t think the band has ever come close to matching the perfection of Ænima.  Opitate was a good introduction for the band and Undertow let the world know that this was a band that could not be dismissed.  Ænima cemented Tool’s reputation as one of the top acts in its genre, be that hard rock or metal.  Since then, Tool has gone in a different direction.  This isn’t surprising as none of Tool’s albums sound the same, though the most recent two, Lateralus and 10,000 Days, are the most alike.

At any rate, Ænima combines the best elements of Tool to create a perfect album.  There are dirty, crunchy riffs along with clean melodious moments.  Frontman Maynard James Keenan’s vocals are as dynamic as they come.  Subtle and cryptic, soaring and beautiful, distorted and angry, aggressive and direct.  This duality serves the band well and adds a layer of mystique and danger to everything  the band does.  None of the topics seem safe.  The title track yearns for armageddon, “Eulogy” crucifies a martyr with not-so subtle jabs at Scientology, “Pushit” describes a relationship seemingly destined to end in a murder-suicide, and even a simple filler track, “Die Eier von Satan,” tricks the audience into thinking it’s listening to a Nazi rally.  This, of course, is the band’s brand of humor taking center stage as in reality it’s a Hitler sound-a-like (Marko Fox) reading off a recipe for cookies.

One never knows what Maynard will look like when attending a live show.

The subject matter of the songs is really a post all its own.  The rhythms provided by drummer Danny Carey are complex and off-time leading to the album’s sense of unease.  Guitarist Adam Jones’ work on the album is vital to its success.  Sometimes credited along with Maynard as the creative force behind Tool, he weaves a tapestry of taste and aggression.  The guitar finds the right tone, the right mood, in every song and either works in sync with the drumming and bass or in contrast to create something unique all its own.  Jones avoids flash without being understated.  Tool proves with Ænima that it’s a fully functioning band with no one component drowning out the other.

When it all comes down to it, Ænima is a hard album to pick a top track from.  Everything on this album is designed to work with one another.  From the simplest segue to the abum’s bloated close, “Third Eye.”  It’s an album designed to be listened to from track one through fifteen.  It’s a colossal, roller-coaster of an album, and if I am to simply exclude personal taste and affection, it’s the top album from the 1990’s.