In case anyone is wondering, no, I did not put this album at number 4 on my list because of its title.  It just worked out that way.  If anything, I’ve depressed this album on my list though I’ve tried not to.  I love this album, and sometimes after listening to it I feel it’s my all time favorite.  It possesses the most variety of any Glenn Danzig release, past or present.  The production is probably the best that Danzig ever saw, be it the vocals, guitar, or drums.  It’s moody, dark, personal, angry, violent – all of the components possessed by a Glenn Danzig fronted band.  And yet, I didn’t always feel that way…

I did not get this album when it came out (appropriately) in 1994.  I didn’t even know who or what Danzig was at the time.  I was too busy playing Sega Genesis and listening to Aerosmith to care.  It wasn’t until late 1997 or early 1998 that I was even aware of who Glenn Danzig was.  It was at that time that I was turned on to The Misfits by my closest friend (whom I owe a great deal to when it comes to music).  Before then The Misfits were just a band with a cool logo I saw on many t-shirts worn by the punk rock kids in my school.  The first song to grab me was “Attitude” off of the Collection II release put out by Caroline.  From that moment on I began to consume everything Misfits.  Their limited, and often repetitive, discography was soon in my possession.  And while I enjoyed it, it often felt like a cruel joke that before I was even born, The Misfits as I enjoyed them, were disbanded.

Finding the re-formed Misfits of the mid-90’s to be a cheap imitation of the real thing, I soon turned my attention to Danzig (I was at the time unaware that the Glenn Danzig fronted band Samhain existed between The Misfits and Danzig).  Wanting to find something current to enjoy, I went to the store with the intent of purchasing a Danzig record in hopes that it would captivate me as much as The Misfits had.  I settled on Danzig 4p, soley because it was the cheapest (10 bucks) and the track list was at least interesting.  Song titles such as “Brand New God” and “I Don’t Mind the Pain” were intriguing and gave me the impression that this would be more dangerous and mature than anything The Misfits had produced. 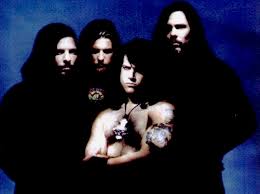 emotions.  The Misfits were fast, aggressive punk rock with a campy horror theme.  This was not.  The opening track, “Brand New God,” was fast and brutal with a slow bridge in the middle that soon brought the track back around to the speed metal it opened with.  A solid effort, in my mind.  After that though, the album descends into mid-tempo and even slower.  “Cantspeak” and “Going Down to Die” contained nothing even faintly resembling anything The Misfits did.  I was let down, and filed the album away.

I did not give up on Danzig after my initial purchase of 4p.  I went back and bought the debut album and allowed the stripped-down rock to grow on me.  I would soon acquire the entire back catalogue liking each album more than the ones I had bought previously.  At some point, probably when I had finally realized and accepted that this band could not be The Misfits, I came back to 4p with eyes open.  I realized how terrible my approach was initially, and musically speaking, it was one of the best things I ever did.

As I mentioned in the opening paragraph, 4p represents many peaks for not just the band, but for the artist Glenn Danzig.  The opening salvo fired by “Brand New God,” is like the ultimate red herring.  Aside from that bridge, it’s direct, simple and unapologetic in its delivery.  It bleeds into track 2, “Little Whip,” which begins quietly before exploding into a monster riff and machine-gun drumming.  The album’s violent beginning descends into its softest spot, the melancholy “Cantspeak” (sic).  Said to be influenced by politics and the general state of the world, “Cantspeak” represents perhaps Glenn Danzig at his most vulnerable.  The back-mask guitar (the inverse of the album’s closer, “Let it be Captured”) gives it a creepy gloom accentuated by the distorted vocals on the chorus.  The verse contains Glenn’s softest vocal delivery, bordering on falsetto.  It is a song that is both beautiful and depressing.

The album meanders along with this approach of dark and gloom.  “Going Down to Die” is one of Danzig’s greatest vocal achievements.  With his velvety croons dressing up the verse, he bellows out the big chorus to tremendous effect.  The bleak “Dominion” closes out the first half and is one of the few songs to follow a simple verse-chorus-verse-chorus-solo-outro pattern.  With it nestled amongst atypical material it comes across as refreshing.

Just when it appeared the album had settled into a distinct sound, “Bringer of Death” brings it back to where it started.  Opening with air raid sirens and machine-gun fire, the song is an uncompromising track focused on the devil, God, and war, and how the three are all intertwined.  Its structure mirrors that of the opening track, right down to the slow bridge before crashing through the outro.  The intermission, “Sadistikal” (sic) follows and provides a hint for the industrial elements Danzig would soon embark on following this release.  It’s not quite a song, but a feeling, designed to make the listener uncomfortable and introspective.  “Son of the Morning Star” follows and returns the album to a slower, quieter state.  The following two tracks present more of a mix, effectively combining the slow and fast in creating perhaps the most radio friendly tracks on the album.  The closer, “Let it be Captured,” is an all out power ballad.  “Going Down to Die” is one of Glenn Danzig’s best vocal performances, but “Let it be Captured” is the best.  The lyrical content is both sweet and sad as Danzig allows himself to appear in a weakened state.  He almost howls throughout the final parts of the song.  A sorrowful wail where the song’s title is repeated over and over.  A hidden track appears on track 66.  It’s basically a hymn and one of those cool, experimental type of hidden tracks that seem to have vanished from today’s releases.

In the end, Danzig 4p is one of the artist’s all-time best.  And for someone who has been releasing music since the 70’s, that’s high praise.  It is an album that both hits the listener in the mouth and drags it down to the darkest depths.  In many ways it is the peak for the original lineup of the band Danzig.  John Christ is employed to great effect on guitar with both hard-hitting riffs and melodic ones.  His delivery proves he is more dynamic than the previous three studio albums had lead many to believe.  He doesn’t get as many opportunities to shine with solos, but when he does he delivers.  Chuck Biscuits is relentless on drums, his best performance ever captured on a

Despite general disinterest on the part of MTV and radio, Danzig was able to establish a strong cult following. 1993-94 represents the band’s peak in popularity culminating in two top 100 singles and two gold records.

recording.  Always a highlight of the band, Biscuits sets the tone on many songs with the highlight performance probably coming on “Bringer of Death.”  Eerie Von, an often forgotten component on bass, is given more room to breath on this album.  His no frills approach suits the work.  And then of course there’s the central figure, Glenn Danzig, on vocals giving his best performance ever.  He howls, wails, and croons his way through the twisting and turning record.  Never again would his voice be this strong on a Danzig release.  Lyrically he was willing to explore more with this album than on previous ones.  The familiar heaven and hell elements were present, but now he was adding in more of an S&M vibe.  Some of the songs are more personal and the pervasive machoism of the previous releases relents some in favor of vulnerability.  Even in some of the slower songs on past records, the protagonist of the songs was usually in control, the only exception being the well-received “Sistinas” from Danzig III.

Danzig hit all of the right notes on 4p and it ends up being a wonderful note for the original lineup to go out on.  Following 4p, Glenn Danzig would leave the Def American label and begin the twilight era of his career composed of uneven releases, multiple labels, and frequent lineup changes.  This isn’t to say that Danzig 4p represents a swan song of sorts for the artist as quality has been put out since, but it was an end of an era and one many fans remember fondly.  And even so, Danzig 4p is an often overlooked album by both Danzig fans and hard rock fans in general.  Which in many ways represents the album’s sound of both tragedy and triumph.