Children of Bodom burst onto the extreme metal scene in 1997.  After getting onto the bill as a support act for Dimmu Borgir, Bodom was able to draw major label interest from Nuclear Blast who would soon agree to distribute their demo LP, Something Wild.  The album would prove to be a modest success but the seed had been planted and by the release of their second album, Hatebreeder, Children of Bodom was a popular name in heavy metal circles.

Hatebreeder was released in 1999 and was met with great success in their native Finalnd, as well as in other parts of Europe.  Children of Bodom have released four full-length albums since, with a fifth due out in March, to critical acclaim and increased popularity but have not come close to eclipsing their sophomore effort. 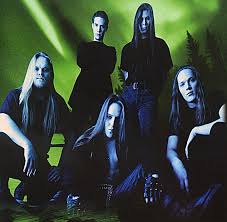 Bodom, as it was constructed during the "Hatebreeder" years.

Hatebreeder represents a technical fury of speed and melody.  The actual sub-genre that Bodom fits into has never been clearly defined.  Metal is of course noteworthy for having numerous and excessive amounts of sub-genres and Bodom has been labeled as melodic, neo-classical, death, black, and probably others I’m forgetting.  Their exact genre is not important, most fans of heavy metal can get into this record.

The main selling point for Bodom is the guitar playing of frontman Alexi Laiho and the keyboards of Janne Wirman.  Laiho combines the best aspects of Randy Rhoads and Yngwie Malmsteen to create his signature sound.  Complicated leads and blistering solos are not uncommon, but he also knows when to focus on melody over speed lending a bit of taste to the guitars on the record.  Wirman is the perfect complement to Laiho as his keys contain the same technical bliss as the guitars.  Some of the album’s best moments involve Laiho and Wirman trading off leads or playing in sync with one another.

The rest of the band proves functional and gets the job done.  The only drawback for some on the album are the lyrics and vocals.  The lyrics, from what is decipherable, are mostly metal cheese and Laiho’s vocals are the growling kind associated with extreme metal.  His vocals are even lower on this album as opposed to later releases where his grunts became more of a rasp.  The lyrics are a bit less campy here than some of the stuff that would follow. This live album, recorded during the "Hatebreeder" tour, cemented Bodom's reputation as one of the most technically impressive bands around as they reproduced their studio sound live without the addition of overdubs.

Some of the highlights of Hatebreeder include the first track, “Warhearts,” as it sets the tone for the rest of the record.  The title track contains one of the better choruses and one of the album’s signature moments when Laiho and Wirman duel during the song’s outro.  “Towards Dead End” is a popular track amongst fans and live crowds, but the absolute best track may be reserved for the album’s closer and lone single, “Downfall.”  From it’s epic intro to big solo, the song packs the thunder and energy that best defines the Children of Bodom sound making this the band’s signature track.

It remains to be seen if Children of Bodom will become a band known for peaking too early.  While the albums that followed have varied in terms of quality, I personally think none have come close to matching the quality found on Hatebreeder.  Despite the fact that the band has been around for over a decade, the band members are still very young so anything is possible.  Even if they never make another album as good as Hatebreeder it won’t change the fact that we already have some great material.  There are many bands that wish they could say they had released an album of Hatebreeder’s quality.  Bodom could put their instruments away today and leave the metal community feeling pretty good about the music they left behind.

This entry was posted on Friday, January 21st, 2011 at 12:25 pm and posted in Music, Top 10 Albums. You can follow any responses to this entry through the RSS 2.0 feed.
« Video Games – A Fading Interest
The State of MLB Video Games »