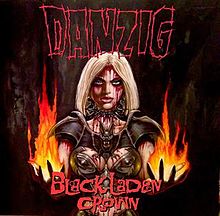 Anytime something new related to Danzig arrives at my doorstep I wonder if this it’s the last. Glenn Danzig, the venerable punk-metal icon, is in his sixties. He’s released around two-dozen records at this point and has already reached the point in his career where he forgoes touring in favor of festivals and gigs located close to his SoCal home. The gap in years has only widened between album releases, and he’s taken time to do more passion projects like a covers record and compilations. Danzig’s last studio album, Deth Red Sabaoth, came out in 2010. Before that was 2004’s Circle of Snakes. Now in 2017, we have the latest from metal’s favorite crooner:  Black Laden Crown.

By pretty much everyone’s standards, Danzig the band has long since past its peak. Some feel the band peaked with 1992’s How the Gods Kill, others (myself included) would consider 1994’s Danzig: 4P as the real high point. Following that album was when the original lineup was disbanded, Danzig left the Def American label, and the direction of the band was forever changed. That was really the end for the band as a popular one, with nostalgia really only bringing the band back into the spotlight (a trend many bands of the 80s and 90s have benefitted from). Creatively though, Danzig has still made worthwhile music, even if it wasn’t always on par with the early days. Deth Red Sabaoth was probably the band’s best effort since 1994 with the only black marks on it being the subpar production (a frequent bane of recent Danzig releases) and the lack of a truly standout track. It would have been a fine album to go out on, but thankfully Danzig decided there was at least one more record left to make.

Back for the first time since 2002’s Danzig 7 is drummer Joey Castillo (center).

In many ways, Black Laden Crown is similar to Deth Red Sabaoth. The personel involved is largely the same, only this time with more drummers. Tommy Victor is back on guitar, and Glenn Danzig naturally is providing all of the vocals and doing all of the song writing, while also contributing on guitar, bass, piano and drums himself. Johnny Kelly returns to drum on two tracks, while former Danzig drummer Joey Castillo (Danzig 5, 6, and 7) also returned for a guest-spot on a couple of tracks. Karl Rokfist and Dick Verbeuren also contribute drums on a track each. Why so many drummers? Because the album has been in production off and on for years and Danzig would just grab whoever was available when in the studio. This means longtime collaborator Steve Zing is still basically just the live bass player as he is once again denied an album credit.

I’m going to detour away from the music for a minute and take a look at another aspect of Danzig albums that is also past its prime:  the album art. For whatever reason, the album artwork has been on a decline as well since the Def American days, though not always as drastic. I was mostly fine with the artwork for Danzig 5 and 6, the alternative cover for 5 is actually pretty awesome, but Black Laden Crown features some really cheesy artwork (done by the usually excellent Simon Bisley). The reverse cover image of a flaming Danzig head is even worse. There’s a t-shirt bundle being sold on the Nuclear Blast website and the shirt has a different version of the cover artwork (which is also featured on the interior slip-case for the CD) that is light-years better than the actual album cover. It’s sort of similar to the last album where the European version of the single featured superior artwork than the album. It’s not a big deal and it obviously doesn’t have any impact on the actual quality of the music, but as someone who still buys LPs it’s always a drag when the jacket has crappy artwork on it.

Black Laden Crown is best described as an album of mid-tempo, Sabbath influenced, metal. The opening track is a red herring of sorts, featuring a clean-tuned guitar and an uptempo second half, but it also embodies some of the flaws the rest of the album is going to face. And it should be discussed early in this review because there is no getting around it:  the production sucks. Perhaps sucks is too strong a word, but if you were disappointed with the production on Deth Red Sabaoth or the more recent covers record Skeletons, then you’ll be disappointed with Black Laden Crown. What is really unfortunate is that most of the poor production rests on the vocals. As the vocalist for the band, it’s surprising that producer Glenn Danzig doesn’t devote more resources to how his actual voice sounds. Time has obviously altered Danzig’s voice as it would anybody, but some of the songs sound like he just did a one take tracking spot, and decided to use that for the final mix. The lead single, “Devil on Hwy 9,” is especially bad with the vocals sounding dry and wooden. The production on the guitar and drums at least seems noticeably better than what was present on Deth Red Sabaoth. I haven’t seen Danzig discuss how this record was recorded, but the previous one was done with analog. Given that this one was done across so many different recording sessions, it wouldn’t surprise me to find out if it was done digitally since that method is more prevalent and easier.

If you like buying your albums multiple times, Danzig’s got you covered with all of the editions of this one.

The other main issue I take with the performance of the record is with Danzig’s vocals. The production may not be doing him any favors, but several songs just lack emotion out of the singer. “Eyes Ripping Fire” should be a track that rips, but Danzig sounds like he’s just going through the motions. I’m not sure what he was going for with his performance at times, but he just sounds bored in places. Maybe he thinks his voice isn’t suited for certain styles any longer, though I think it has more to do with a mood he was trying to convey. He may have been looking for a controlled, assertive style to his vocals, but it just comes across as uninspired.

Those are the negative take-aways I have with Black Laden Crown, but in spite of those I actually think the whole of the album is actually pretty good. The vocal production is consistently subpar, but not as varied as the past albums where some songs sounded okay and others like rubbish. I really dig the Tony Iommi-like guitar tones on this record and its a sound I’ve always found more suitable for Danzig than the drop-C tuning featured on some records. There are still some chugging low riffs to be found, but they’re not as prevalent and the album has a more crisp sound. Tommy Victor is perhaps at his best with this record, at least as well as he’s been on a Danzig release. He’s given room to work with the leads, and even gets a few chances to drop a solo. The pinch harmonics that some fans found distasteful on the last album have been scaled back tremendously here.

I wish they had used the artwork present on this t-shirt as the main cover artwork on the actual LP.

Black Laden Crown is at its best when the band is moving at a methodical pace and letting Glenn Danzig’s presence shine. It’s perhaps no better illustrated than with the album’s second single (and first to receive a video) “Last Ride.” The song evokes a drifter, or maybe even an old cowboy, something very Eastwood-like, with its story and the mood is very Danzig. It’s perhaps comparable to the song “Black Hell” from The Hangover II soundtrack, but more refined and focused. The album’s closer, “Pull the Sun,” is another good track and is probably the high point for Danzig’s vocals on this release. It’s not one of the closing numbers where Danzig goes off with a series of wails, but it’s got a nice vocal melody. The lyrics though make me think of Mr. Burns blotting out the sun on The Simpsons, which gives me a little laugh.

If there’s one last piece of criticism I could lay at the feet of this record it’s that it is perhaps one track short. At nine tracks and just over 45 minutes in length, it could have really used one more track to round things out. And if that track had been something more up-tempo that would have helped to break up some very similar sounding songs on the album’s back-end. The most up-tempo track is also the album’s worst, “Devil on Hwy 9,” so another really would have helped out. Even still, I’m digging this album. Perhaps part of that is due to my low expectations going in. An album that has been in the works as long as this one has usually doesn’t come out too well in the end, but I think the album took so long to record not because Danzig was tinkering with the material, he just literally only recorded a song or two here and there until he eventually had enough material for an LP. It’s very comparable to Deth Red Sabaoth in terms of quality, and if it’s the last album for Danzig it’s not a bad way to wrap things up. I’m not sure if it’s better than that record though. At first listen I thought it might be, but then I remember the variety of Deth Red with tracks like “Hammer of the Gods,” “Deth Red Moon,” and even “Black Candy” and I start to think this one may end up ranking behind that release. Which isn’t bad, as I dubbed Deth Red Sabaoth Danzig’s best since splitting with Rick Rubin, so if Black Laden Crown is comparable to that record, then that’s pretty good company to keep.