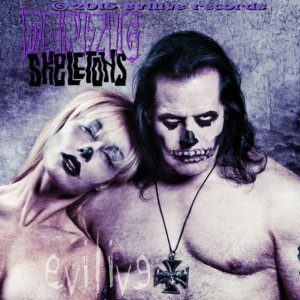 “Skeletons” is a covers record by Danzig that has been discussed publicly going as far back as 2010. The first single for the album was unveiled online on the Danzig website in 2012, but it wasn’t until November 27th, 2015 that the album was finally released. Totaling ten tracks with a running time just over 36 minutes, it’s a bit puzzling how such an album could take as long as it did to get released, but so be it. In reading interviews with Glenn Danzig I got the impression that the album was recorded piece by piece over the years with the band never fully committing to just go into the studio and pound through it. And considering a covers record probably isn’t expected to move a ton of units or make a lot of money, there likely was no sense or urgency with the record at any point in time.

When it comes to art, it really doesn’t matter how long something takes to get done, only the finished product matters. Of course, when it comes to a covers record we’re talking a lesser form of art. These are songs all written by someone else and recorded a long time ago. And though artists often like to boast, Danzig included, that they’re bringing something new to a song they cover, the truth is the songs are largely unchanged. In the case of the songs contained on “Skeletons,” most of the songs sound as they were originally recorded but with added down-tuned guitars and Danzig’s voice in place of the original singer. Listen carefully and you’ll pick out some slight variations in the lyrics, but it’s nothing major. And there are some tracks altered more than others, the most obvious being the Elvis cover “Let Yourself Go,” which basically turns a rock-a-billy track into something more resembling a punk track with a sinister groove.

The cover for the album’s single, “Devil’s Angels.”

“Skeletons” gets to benefit from a couple obscure tracks. The two lead-off tracks, “Devil’s Angels” and “Satan,” are not likely to be known by most listeners making them feel like all new songs. “Devil’s Angels” features former Misfits guitarist Doyle in an uncredited role and features a sound that may or may not answer the question of what a Misfits record in 2015 would sound like with Glenn and Doyle onboard. It’s a fast, uptempo number with really only one hook, but the song ends before it becomes overplayed. “Satan” is from the film Satan’s Sadists, so if you’ve seen that you may know the song, but chances are you have not (I certainly haven’t). “Satan” is more of a blues-based number and the lyrics invoke the Lucifuge era tracks “Killer Wolf” and “I’m the One.” The single release of “Devil’s Angels” features a version of “Satan” that’s just Glenn and an organ. I didn’t care for that version but the album version of the song is pretty rockin’.

Other covers stand-out, including the ZZ Top track “Rough Boy” and the Aerosmith cover of “Lord of the Thighs.” The latter is probably the most surprising inclusion on the record as I never took Glenn Danzig for someone who would be familiar with some of the more obscure tracks from Aerosmith. “Lord of the Thighs” was always an oddball in the band’s library, with its bouncing guitar riff way ahead of its time. Danzig’s version of the song is obviously tuned lower giving the riff a more driving quality to it. Steven Tyler’s vocals on the song come across as seductive, and at times, even a little playful, while Danzig’s are more commanding and dominating which isn’t all that surprising, all things considered. Danzig’s cover of the Everly Brothers’ “Crying in the Rain” closes things out and it’s a nice little downer (in mood) of a track to end the record, though I do wish there was a little more emotion in Glenn’s vocals, but it’s a nice little cover. The only song I really wasn’t all that taken with is Danzig’s Sabbath cover, “N.I.B.” In the case of that track, it’s just a song that’s been done too much before. It even has its own cover by Primus featuring Ozzy on vocals that probably improved the original more than anyone else could ever hope to (not that the goal of a cover is really to improve a song). With Sabbath’s vast catalogue, it just seems like there are songs more suitable for Danzig to cover. Danzig’s take on “N.I.B.” doesn’t bring anything new to the table, it just swaps out Ozzy for Glenn and Iommi for Tommy Victor, which is a clear downgrade as Victor’s noodling outro is more distracting than anything.

In addition to the standard CD digipack release, “Skeletons” is also being released on vinyl in numerous variants.

The production on recent Danzig releases has been spotty, at best, and the same is true for “Skeletons.” Some of the vocals sound too distant and hollow, with the worst probably being the opener “Devil’s Angels.” Some tracks, like “Action Women,” seem to put the instruments and vocals in competition with each other and they all just seem to be rising in intensity throughout the song. The worst overall track in terms of production is probably “With A Girl Like You” which just comes in so much lower in volume when compared with the surrounding tracks. In some respects, the production adds a garage feel to the album which seems appropriate for a covers record. “Crying in the Rain” has a muted softness that actually works with the material. All in all, for a Danzig record, the production is actually fine and arguably better here than it was on the past two proper Danzig albums.

“Skeletons” is a nice little collection of songs that not only work individually but actually arrange well with each other to form a credible album. My expectations, even as a longtime Danzig fan, were actually pretty low so I’m happy to say they’ve been exceeded. And I guess if you like Danzig covers then there’s good news as the band isn’t done recording other people’s songs. During the recording of this record, the band did several additional Elvis songs that Glenn Danzig decided would make sense to just release separately as an EP. It’s being referred to as “Danzig Sings Elvis” and I really hope he rethinks that title. It makes me think of Anne Murray. There was also an additional song released online a couple of years ago, a cover of the Lee Hazlewood and Nancy Sinatra duet “Some Velvet Morning” that Danzig recorded with Cherie Currie of The Runaways. The song was cut from this release and the rumor was it had something to do with Hazlewood’s estate. I don’t know if they just plain didn’t want the song being covered by Danzig or if they were demanding a larger than normal royalty or whatever, but the song is readily available online and I don’t think anyone is really missing out. It would have been the worst track on the album had it been included. There is a new Danzig album also being worked on and it’s expected sometime next year, but with Danzig you should never hold your breath. For now, we have 36 minutes of cover songs to bridge the widening gap between releases.