It feels like it has been a long while since I’ve made a “Music” entry here. That’s probably due to music not having an inherently nostalgic feel for me, especially when compared with television, movies, and video games. Truthfully, nothing about this particular post is really nostalgic for me, but it is one I feel compelled to make.

Devin Townsend is back once again, and this time he brought Ziltoid along.

Devin Townsend has been at this whole music thing for quite a long time now. Whether you associate him more with Strapping Young Lad, Steve Vai, or as a solo artist it’s possible you’ve been listening to him for twenty plus years. He’s released a lot of material under various guises and umbrellas and he is one of the rare artists I feel has produced something for everyone. He’s best known for his extreme brand of heavy metal but he’s also done rock, country, punk and pop while taking time out for more obscure designs that may not appeal to anyone (I’m talking about DevLab here)! One of Mr. Townsend’s most noteworthy and recognizable creations is Ziltoid, The Omniscient. The fourth-dimensional intergalactic guitar hero first debuted on 2007’s Devin Townsend Presents: Ziltoid The Omniscient, heavy metal meets old-time radio show mash-up that took listeners on a journey through space as Ziltoid sought to find the universe’s ultimate cup of coffee. The album is basically a cult classic at this point, and if you are unfamiliar with it one I highly recommend. After Ziltoid, Townsend formed the Devin Townsend Project and set his mind on releasing records under that moniker. Ziltoid has been a part of the live show and even made an appearance on the DTP album Deconstructed, but a sequel to the Ziltoid record was only speculated upon. It seemed obvious that Townsend would revisit the material and he would acknowledge as much in various interviews with the media while promoting one of his other albums. Fans wanted a Ziltoid 2, but at the same time, Townsend’s other works were being received quite well so while there was demand, fans were uncharacteristically patient when the Ziltoid 2 conversation would come up. This past summer, Townsend took to the internet and crowd-funding to create a passion project he dubbed Casualties of Cool, a hybrid rock-country record. As part of his promise to those who pledged, any dollars raised, but not spent, on Casualties would be directed towards the Z2 record. Proving once again that he is the hardest working man in music, Townsend not only found the time to produce the Casualties double-record, but also what has become a double-album itself, Z2, and release everything in the span of a few months.

For Z2, Townsend wanted to play up the radio show angle even more and his story about an alien kidnapping a being called a Poozer and igniting an intergalactic war over it was a hard sell to his label. Devin has his own label, but he apparently still has people he needs to answer to, so in order to get everyone on board with the Z2 project he agreed to make it a double-album. In what is probably a rare event, Z2 arrived in stores with two discs that were actually two separate albums. On one disc is Devin Townsend Presents: Dark Matters, which is the Ziltoid disc. The other disc is Sky Blue, the latest album from the Devin Townsend Project. Even though both discs contain essentially the same band, they’re intended to represent two distinct artists, if you will, much as the Devin Townsend Band is considered different from the Devin Townsend Project. If all of that is confusing to you then that is okay, as it’s really not important. The important take-away here is that Devin Townsend released two albums at the same time for little more than the price of one, and to top it all off, they’re both pretty good. 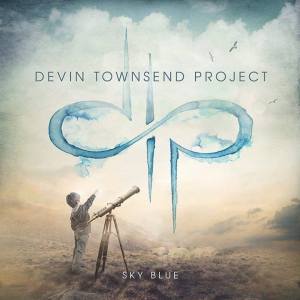 Sky Blue is essentially the bonus disc here, but it also seems like it’s intended to be disc one, so let’s start there. Sky Blue sounds very much like a continuation of the last Devin Townsend Project album, Epicloud, and contains the same supporting cast including vocalist (and now frequent Devin collaborator) Anneke van Giersbergen, best known as the former front-woman for The Gathering. Sky Blue is essentially a pop-metal album. There’s a strong electronic component to the songs and Anneke’s vocals dominate the majority of the record as opposed to Townsend’s. There are plenty of Townsend’s trademark hooks and his “wall of sound” approach to the production. Guitar tones are unusually bright in tone compared with other DTP records with few “crunchy” riffs present. Townsend still employs his old screaming voice in some parts, notably the opener “Rejoice” and “Silent Militia.” The album comes across as being very danceable and some songs wouldn’t seem out of place in a discotheque. The chorus for each song is usually quite catchy, but the album does slow down at parts and becomes more introspective and contemplative. “Before We Die” is the big set piece of the album and it’s positive outlook on life and love makes it a fair representation of the album as a whole. Other highlights include the very catchy title track, which according to the liner notes, is inspired by the Usher track “DJ Got Us Fallin’ in Love.” Raise your hand if you never thought you’d see Devin Townsend giving his interpretation of an Usher track.

Sky Blue is an album that could have been released by itself and appreciated by the Devin Townsend fanbase, but I suspect most of the people who scoop this release up are most interested in the second disc: Dark Matters. The first Ziltoid record was pretty unique when it came out, but it was also basically just a Devin Townsend album with some entertaining bits of dialogue inserted in between some of the tracks. Dark Matters, on the other hand, plays more like a radio show with the music appearing just to enhance the setting and presentation of the unconventional story. It doesn’t really work as a metal album in that sense, but that also doesn’t mean it isn’t any good or lacking of quality material. There are a few tracks that stand-out as entertaining songs, such as the Soilwork inspired “Ziltoid Goes Home” or the punishing “Deathray.” However, those looking for the same experience as was found on the first Ziltoid record may be let down. 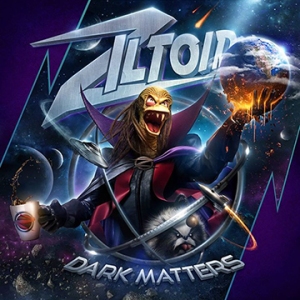 Ziltoid The Omniscient was an extreme metal album. There were some lighter moments to be found, but there was also “By Your Command” and “Planet Smasher.” The previously mentioned “Ziltoid Goes Home” is probably the heaviest moment of Dark Matters, but it doesn’t really approach the heaviness of the first record. The glossy production and electronic elements found on Sky Blue are present here, making the two discs more similar than anticipated, and also making Dark Matters feel more contemporary. The first Ziltoid sounded similar in approach to the material Devin Townsend was releasing at the time, so naturally Dark Matters sounds similar to the more recent Devin Townsend Project albums of today.

How does Dark Matters work as a radio show? Pretty well, though if you’re expecting high art out of the story you won’t find it. It’s basically on the same level as the first album in terms of ridiculousness. Townsend pretty much made that album by himself, but here has the whole DTP band and some guests for other roles. The two most noteworthy additions include WWE personality (and fellow Canadian) Chris Jericho as Captain Spectacular (who was voiced by Townsend on the first Ziltoid album) and Stolen Babies member Dominique Lenore Persi as the war princess. Jericho’s role is basically just a speaking one and he is appropriately cheesy in his presentation of Captain Spectacular while Persi is asked to sing on her character’s main track, “War Princess.” The story as presented is entertaining, though not hilariously so, and some of the charm has definitely faded a bit. It doesn’t really have a lot to do with the events of the first record (which were implied to be the delusions of an overworked barista) but all of the characters that make a return for this record behave in a manner consistent with how they were presented on the first record.

Dark Matters is an entertaining ride, though it’s function as more of a theatrical release make its lasting appeal questionable when compared with the first record. And in a somewhat surprising twist, it’s actually the package’s other disc, Sky Blue, that shines brightest. The two work surprisingly well as a package release, and as a fan of Townsend’s work, I must say it’s pretty awesome to receive a third album from him this calendar year. Dark Matters concludes with a “To Be Continued” message so it appears we’re set for more Ziltoid in the future, which is fine by me. Hopefully, the Devin Townsend Project, which was originally supposed to just be four albums but has now become six, continues long into the future as well.