At this blog, I do not get the luxury of many short posts. I tend to say a lot about the subjects I cover, but on this occasion I think I can keep my words to a relative minimum. I say this to myself, of course, as I begin writing this entry so who knows if that will hold true or not. The reason for my optimism is because I’m here to talk about a little puzzle game for the NES called Fire ‘N Ice. Being a puzzle game, there’s not a ton to talk about, but don’t confuse that as me saying this isn’t a post worth reading or a game worth playing.

Fire ‘N Ice is a game produced and developed by Tecmo and was released in Japan in 1992 and other parts of the world in 1993. If you’re at all familiar with the history of video games then those dates probably mean something to you. This was of course after the release of the Super Nintendo, and if you collect older games then that’s something that can be discouraging all by itself. Being an 8-bit game in a 16-bit world means Fire ‘N Ice was pretty much ignored upon release. Being a puzzle game, and prequel to the under appreciated Solomon’s Key, meant Fire ‘N Ice was always going to have a limited audience, but it’s timing made it so much worse. As a result, the game was produced in low quantities and tracking down a cartridge today is going to set you back a few hundred bucks, which is a shame because this is a title worth playing.

When I sat down to play Fire ‘N Ice for the first time I had no idea how rare and valuable a game it was. I was just in the mood to play a puzzler that’s not just another Tetris clone. I was familiar with Solomon’s Key, but it wasn’t a title I had any particular affection for. This game just seemed appealing because of its bright colors and simple design. In Fire ‘N Ice, you play as the apprentice wizard Dana who has been bestowed with a magic ice wand by a fairy to save the land from an evil wizard named Druidle. The story isn’t important and can be ignored, but if you’re into continuity Dana is the same Dana from Solomon’s Key and this is essentially how he got his start.

The game is comprised of ten worlds with ten individual levels within each world. Dana moves along a map to each world and they can actually be tackled in any order, except world 10 which becomes available after completing the other nine. The stages themselves are single screen levels in which you are tasked with extinguishing the little fire enemies onscreen, which will vary in number. Extinguishing them requires Dana to either drop a block of ice on them or kick a block of ice into them. Dana’s wand enables him to create these ice blocks, but he can only make them appear diagonally in front and below him, as opposed to directly in front of him or directly beneath his feet. He can also make the ice blocks disappear in the same fashion. Dana cannot jump, but he can climb onto a block that’s directly in front of him. If a block is in front of him with no wall or other block behind it, then Dana can kick it and it will slide until it meets an obstacle. Contacting an enemy or fire results in death. The gameplay is quite simple, but like any good puzzle game this simplicity is built upon to create some brain-teasing levels and maximize its usefulness as a gameplay mechanic.

An early, fairly simple, level. The object is to either drop an ice block or kick an ice block into the flame to extinguish it.

As the game progresses new elements are introduced. There are blocks that are permanent and can be pushed around one “tile” at a time. There are jars that Dana can climb onto or walk across that become burning jars if contacted by one the flame enemies and cannot be extinguished. Dana is also unable to create blocks of ice on top of these flaming jars making it a dicey proposition to consider when dropping an enemy onto one. Pipes are also introduced that Dana can move through which add a new dimension to some of the stages and it’s one used some-what sparingly so as not to become over-exposed. Each world ends with a boss stage that often introduces a new gameplay element. Some of these stages include enemies that move around the stage and will kill Dana by touching him. Others are scrolling levels where lava is slowly rising and Dana has to dispatch of the enemies without being consumed by the lava. The only true boss fight is saved for the game’s final level, but it’s still approached with the same spirit as the other levels. It’s actually one of the easier stages in the whole game, to be honest.

The game is appropriately challenging while also being forgiving. Perhaps disappointing to some is that most levels only have one true way to complete it without room for much deviation. One wrong move or lack of foresight can sometimes doom you to repeat it. At any point, the game can be paused and the level restarted which is definitely a welcomed inclusion. Since the regular flame enemies are also stationary, there’s typically no harm in just letting the screen idle while trying to plan your next move. I found that I would mostly start slow and then get into a rhythm after a few stages and breeze along until something came along and stumped me. The game requires you to think in a certain way to figure out most of its puzzles and often times when I got stuck I’d eventually have a “eureka!” moment and admonish myself for not thinking of it sooner. The game also possesses a password system so you can come and go as you please. The passwords aren’t terribly long and complex, which is always welcomed. There’s also an in-game timer for each level that exists purely for your own amusement. Beating the game’s ten worlds also opens up a bonus section of worlds consisting of an additional 50 levels, which is quite a nice reward. Also included is a level editor in case you want to create your own puzzles, but unless you have a Famicom copy, you can’t save your own creations which kind of defeats the purpose. 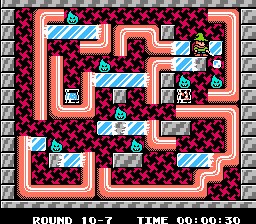 A later, far more complicated, level. Dana can travel through the red pipes and will immediately pop out the opposite end.

Fire ‘N Ice may have a pretty ho-hum name in North America (in other territories it was simply called Solomon’s Key 2), but it’s a pretty entertaining puzzle game. If you have access to it, I heartily recommend it. Unfortunately, having access to it via legal means is rather challenging. Tecmo has never released the game digitally through Nintendo’s Virtual Console service (though it did for Solomon’s Key) nor has it even included it on any compilations which is disappointing since this would be a great portable game. As I mentioned earlier in this post, an after-market copy is prohibitively expensive and as much as I enjoyed the game I can’t recommend it if the cost is as high as I tend to see it. There are sellers on eBay offering clone carts, which while not entirely legal is probably your best bet if you want to experience the game on an actual console. And of course, there’s also emulation and ROMs floating around the internet. I’m not an advocate for piracy, but in the case of a game like this that the original publisher doesn’t make available to consumers (and hasn’t for 25 years) I can’t exactly find much harm in just downloading the game. It’s a game worth playing, and it’s a shame to see such a title become lost to time and old hardware.

I can’t believe I just spent over 1300 words on this one. Better luck next time!

This entry was posted on Wednesday, August 2nd, 2017 at 4:03 pm and tagged with classic gaming, nintendo, puzzle games, solomon's key, tecmo and posted in Video Games. You can follow any responses to this entry through the RSS 2.0 feed.
« The Legend of Heroes: Trails of Cold Steel II
Batman: Mask of the Phantasm Blu Ray »