Roger Ebert and the Great Debate: Video Games as Art

Nearly three years ago a blog entry popped up on famed film critic Roger Ebert’s site that ignited a response from the gaming community in a way usually only reserved for the likes of pro-censorship groups and individuals.  The title of this blog, Video Games Can Never Be Art, was a bold statement that seemed to cut to the core of many gamers and industry types.  It has attracted nearly 5,000 responses and spawned numerous rebuttals of various kinds.  Ebert, who passed away recently, never showed much desire to revisit the topic over the years preferring to let those words just hang in the air.

I do wish Ebert had chosen another title for his post as the absolute tone it takes seems foolhardy to me for someone so well learned.  The title is actually a quote and one he had given earlier intended as more of a throw-away line in a much larger discussion.  Ebert chose to return to it because it received more attention than he anticipated and elected not to change it, but did acknowledge its weakness.  Her clarified his opinion to something more along on the lines of that video games are not art presently, and no one currently alive will live to see them regarded as such.  That is definitely a much better argument as it’s impossible to predict where tastes are heading.

However the argument is to be phrased, gamers around the globe seemed to take it personally that their chosen recreation could be perceived as something other than art.  Most of this stems from the fact that many who elected to respond to the piece apparently did not get past the title.  Again, Ebert is partially blamed for that but it is important to understand where he is coming from before forming a proper rebuttal.  Ebert’s opinion resides on the game itself.  Components of a game are considered forms of art.  Still images, music, animation – these are all considered artwork.  I don’t know if it was asked of him, but Ebert would probably consider the directors of some games as artists of some kind.  He also expressed a sense of surprise in how his statement was received, noting that the likes of Michael Jordan and Bobby Fischer never seemed to take it personally that their games are not considered art.

It’s this lack of understanding of where Ebert is coming from that makes a great many of the responses to his opinion ill-conceived.  So many want to focus on the parts of a game that Ebert would consider a form of art and fail to understand that it’s the game that Ebert is declaring as non-art.   Another thing hampering Ebert’s argument is the fact that he openly declares he does not play modern games and had no desire to do such, thus we’re left to assume what first comes to mind for Ebert when the topic is brought up is Pong as opposed to Bioshock.  That’s not entirely relevant though, as is playing a game of virtual tennis any more or less artistic than shooting bad guys in high definition?  Neither is art, but modern gamers would immediately point to the story contained in a title like Bioshock, to which Ebert would point out that it ceases to be a game and is a representation of another form of art.  In other words, if your argument for games as art is that it’s an interactive story then Ebert considers it a representation of a novel or film and not really a game.  He does not, however, go on to say such games are forms of artwork so if there was hope for a compromise between the two camps it seems that door was shut.

On that level, I tend to side with Ebert on this one.  I love video games.  There have been times in my life where games have been my primary source for entertainment and it’s possible I’ll enter another phase later on where they will be again.  Video games will probably be a part of my life for its duration which certainly separates me from Ebert and is perhaps something he forgot.  When Ebert was born television was still fairly new and the only way to see a film was to go to a theater.  Video games were never a part of his life save for maybe on the periphery at times.  And even tough they have been a large part of my life, there still is no singular game that can stack up as art when compared with works from other accepted classes of art such as music, film, and poetry.

In order for a game to transcend into art it needs to incorporate the game itself into its argument.  Okami is a delightful game to look at, but physically playing it is not a remarkable experience when ignoring the visual style and plot.  Heavy Rain is an example of film-quality story-telling and a game I enjoyed very much, but it too falls into that representation of a film category Ebert mentioned.  In that game, the actual game components are fairly minimal and oftentimes are the biggest hindrance to enjoying the game as simply controlling the characters is awkward and, at times, a chore.  Many of the other games often cited by gamers in the comments section are too preoccupied with the game’s narrative and their emotional response to it.  Separate that narrative though and could it exist on its own and still instill such a response?  Or strip away the player control and just watch the “game,” how much does the emotional response change?  While I’m sure it would be affected in some way, probably not as much as some people would like to think. 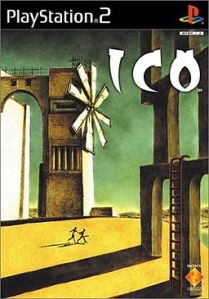 In searching my brain I could only come up with one game I’m even tempted to make an argument for as one that toes the line between game and art:  Ico.  Ico, at its core, is not remarkable in a sense that it should be considered art.  It’s a fairly basic three-dimensional platform game.  The player controls the main character and has to negotiate jumps, push blocks, and fight enemies with a stick or sword all while attempting to defeat an ultimate bad guy and escape the castle.  Where it hits on a different level is through the non-player character Yorda.  Yorda is a helpless girl that needs to be lead through the castle and protected by Ico.  It’s the interactions with her that make this game different.  In order to progress, the player must take Yorda’s hand and guide her through certain scenarios.  This simple gameplay convention is remarkable in that it adds a semi-tangible element to a non-tangible experience.  When interacting with a game, we as gamers can only interact by ingesting the story being fed to us and with a controller in our hands.  This act of reaching out and grasping Yorda by the hand is an extension of that controller and it’s a simple mechanic that imparts so much.  We’re now a caretaker and this girl is entrusting us with her life.  She speaks a different language so there is no other way to communicate with her.  The game’s setup of giving us control of a character marked for death, has already made this an us against the world type of game, but in Yorda we have another purpose.  She isn’t so much an ally as a goal.  As a player, how much do we actually care for the main character?  And yet, I know when the evil shadow monsters are dragging Yorda down to a dark demise because I failed to protect her it’s not the same as when Ico misses a jump and falls to his death.

Ultimately, I do not know if I would go so far as to proclaim Ico a work of art, but I do know it’s one game (perhaps the only) where the act of playing it caused me to experience something I may not have while engaging other forms of art.  It is a remarkable experience and one I recommend others try.  I’ve played other games that borrow heavily from Ico, most recently Dokuro on the Playstation Vita, but none are able to resonate the way Ico does (not to say that Dokuro is a bad game, it’s quite the opposite, if you have a Vita you should absolutely have a copy).  In the end, I guess I side with Ebert on this one.  I recognize that many aspects of a game are forms of art, or collaborative art.  I think someone like Hideo Kojima is an artist of some renown even if his chosen work is not on par with other forms of art.  Where I differ with Ebert is that I do entertain the notion that in my lifetime games may take on a higher purpose.  They’ll never be as highly regarded as film or sculpture, but there is a movement towards games as art that probably can’t be stopped.  As long as they continue to become a larger part of society appreciation for them will continue to grow.  In the meantime, whether a video game is considered an important work of art or not is irrelevant to me.  If it’s a good game, taking into account there are many ways for a game to be good, I’ll enjoy it no matter what it’s place in the great debate may be.

As a postscript to this entry, I did want to offer my thoughts on Roger Ebert’s recent passing.  Ebert was a part of my youth through his television show with fellow critic Gene Siskel.  As a kid, I gravitated more towards Siskel when it came to criticism but as I got older I sided with Ebert more and more.  His website was a weekly ritual for me as I checked out his thoughts each Thursday on the latest releases.  He was always eager to champion the cause of animation, notably the works of Studio Ghibli, and it’s something about him I really appreciated.  Even though I didn’t agree with all of his reviews, I like to think we had similar tastes when it came to film and regardless of how he scored the film I could often tell if I would like it or not simply by reading his review.  There were even times where I felt like he was speaking for me instead of to me.  His review of Batman Begins so well captured my response to the movie and phrased it in a way I could never hope to.  He was a brilliant writer, and his blog was oftentimes more entertaining than his film criticism.  Since he lost the ability to speak, that blog became his outlet and he was not shy about putting his innermost thoughts on the internet for all to consume.  As a result, myself and many readers felt connected to Ebert in a way different from other mainstream writers, be they reporters or other critics.  I felt like I knew him without ever meeting him and was extremely sad to hear about his passing.  I will miss him.

This entry was posted on Sunday, April 14th, 2013 at 10:54 am and tagged with dokuro, heavy rain, ico, kojima, okami, playstation, roger ebert, video games as art and posted in Video Games. You can follow any responses to this entry through the RSS 2.0 feed.
« The Adventures of Super Mario Bros. 3
The Chronological Donald Volume One »

2 responses to “Roger Ebert and the Great Debate: Video Games as Art”