Devin Townsend Project – By A Thread: Live in London 2011 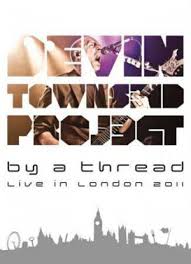 Devin Townsend Project – By A Thread: Live in London 2011

2011 for me was the year of Devin Townsend.  After being a casual fan of Townsend’s work for a few years, I dove in headlong into his back catalog while also enjoying the two albums he put out in 2011 under the Devin Townsend Project moniker:  Deconstruction and Ghost.  Those were two albums that could not be more different from one another, which is something Townsend is known for.  After establishing his name with Strapping Young Lad as a destructive force in heavy metal, he felt secure enough to branch out and really get experimental with his sound.  There probably is a traditional Devin Townsend sound, but for the most part his stuff is all over the place.

One of Townsend’s most creative outlets is with his latest band, The Devin Townsend Project.  Prior to creating this outfit, Townsend was touring and releasing music as The Devin Townsend Band.  After resolving some items in his personal life (namely getting sober) he decided to focus his efforts on a new project.  He envisioned it spanning four albums and decided it would be different enough from what he was currently doing to change the name of his band.  The lineup of musicians that would appear on these albums would be fluid and feature several guests and no two albums would sound alike.  The first of these albums was released in 2009 and titled Ki, the second would follow that year and is called Addicted!  To celebrate the release of the third and fourth albums last year, Townsend decided to do a special series of concerts in London.  The shows would span four days and each night a different album would be featured.  Naturally, the shows went in order of release and lasted four nights.  Not wanting this experience to go to waste, Townsend had each show recorded and the end result is the new CD/DVD box set By A Thread:  Live in London 2011.

The contents of the release which comes housed in a sturdy booklet style holder and cardboard sleeve.

By A Thread was released this past month in both Europe and North America.  The box set includes 4 DVDs and 5 CDs.  Each concert is on its own DVD, while the CDs are arranged by albums with a fifth disc comprising all of the encore tracks played over the course of the four days.  The first three shows were held at the University of London, while the Ghost set was done at The Union Chapel.  I’m guessing this was done to give the more intimate Ghost record a different feel.  Despite the change in venue, the audio quality is consistent across the board and is quite clear and crisp.  The audio wasn’t optimized for 5.1 though, which has left some fans disappointed.  They also aren’t intended for playback in a PC DVD drive, if that’s something that is important to you.

Visually, the DVDs are okay but nothing spectacular.  The venues are modest in size and the image sometimes feels a bit cramped.  The image also won’t be confused with an HD one, but as far as concert DVDs go it gets the job done.  The menu graphics are interesting and fun to look at.  They also contain loads of hidden easter eggs for the curious type.  Most of which are sound-checks and other behind-the-scenes shots.

As for which concert is best, well that’s a matter of opinion.  Chances are, whatever you favorite DTP album is will be the star here.  Where possible, Devin tried to recruit the musicians that actually played on the album, but some were unavailable.  The star-studded Deconstruction suffers the most as none of the guest musicians could contribute.  Rather than use someone else, Devin opted to use recordings to fill the gap as it would seem he went to great lengths to try and recreate the album sound live.  This means instead of hearing someone else sing Floor Jansen’s parts, for instance, you just hear her track from the actual album.  A lot of the backing vocals are also richened with audio samples from the albums, especially some of the songs from Addicted!  I’m the sort of person who prefers as little of that as possible, but it doesn’t harm the experience for me.  Even with that element, the Addicted! set is my favorite.  That’s due in part to it being my favorite of the four albums, and also because Townsend was able to assemble the key contributors from that album (basically Anneke).  The encores are also some of my favorites.

The image quality on the DVDs won’t blow you away, but it gets the job done.

Speaking of which, Townsend took a different approach to each encore.  For the Ki and Ghost sets, the band mostly did bonus tracks from those albums that didn’t make the original release.  For Deconstruction, Townsend reached deep into his back catalog to pull out some tracks from the Punky Brüster LP.  The reasoning behind this, as explained by Devin, is that since Deconstruction was such a nightmare to learn they’d follow it up with a bunch of stuff they didn’t know!  He flubs some of the lyrics too, but it’s all good.  The Addicted! set features some songs selected just to take advantage of Anneke van Giersbergen and includes the tracks “Pixilate,” “Life,” and “Kingdom.”  There’s also some Ziltoid appearances, which is to be expected.

The crowd is pretty good for most of the sets.  They seem particularly into the Ki and Addicted! sets, though slightly flat for the Deconstruction one.  I’m pretty disappointed they didn’t play along with the Ziltoid campaign speech, but maybe by then they were pretty drained.  That album is punishing.  They also didn’t seem too interested in the Punky Brüster tracks, though I enjoyed their inclusion.

All in all, this is a nice set but it’s definitely for the Devin Townsend Project enthusiast as opposed to the casual fan.  It’s cool to have live versions of these four albums, but not really necessary since how often are you really going to opt to listen to the live version over the studio one?  Probably not all that often.  The videos are cool though and Devin and the boys make it fun to watch (especially the previously mentioned Ziltoid campaign speech).  Devin did a commentary track for each set too that gets into more of the nuts and bolts of the production for you gear-heads out there.  The physical package is attractive and makes for a nice display piece.  A word of caution though, the North American edition apparently has a defect with the Addicted! DVD.  I’m not certain what it is exactly as I bought the European edition, so if you have a choice, go for that one.  Apparently the production company is issuing replacements so it’s more of an inconvenience than anything.

Devin Townsend is one of the most interesting musicians around, so even if this set isn’t for you, check out some of his other works.  There’s pretty much something for everyone in his rather diverse catalog.

This entry was posted on Thursday, July 12th, 2012 at 9:40 pm and tagged with anneke van giersbergen, devin townsend, progressive metal, strapping young lad and posted in Music. You can follow any responses to this entry through the RSS 2.0 feed.
« The 3DS XL: Nintendo’s Imperfect Update
Batman’s Top 10 Feature Length Films »

2 responses to “Devin Townsend Project – By A Thread: Live in London 2011”