Getting Cloud Connected with MLB and the Vita 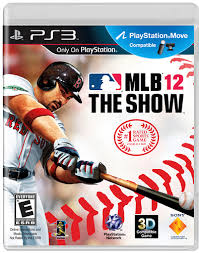 One of my main motivations for acquiring a Playstation Vita was the potential for connectivity between it and the Playstation 3.  It’s been the main focus of Sony’s advertising campaign to get consumers interested in their new handheld and while the launch titles did little to exploit this feature, it didn’t take long for Sony to release a game that did.

Enter MLB 12 The Show.  The game is the latest in Sony’s first-party, and much heralded, baseball title.  Released for both the PS3 and the Vita last week, it makes use of the Vita’s cloud feature in the most logical manner by letting the user take their franchise on the road.  Now when you finish a game on the PS3, you can upload the save file to Sony’s cloud and then download it onto the Vita.  The process is as simple as it sounds and it only takes a moment.  Once it’s been loaded onto the Vita, it’s just like any save file and can be saved down to the Vita’s memory card.  Then you can play it on the Vita while you’re out and about, and once done re-upload it to the cloud to download onto the PS3.  The only limitation is the Vita obviously needs an internet connection to make use of the cloud. I’m not sure if it works over the 3G network for those who opted for that  version of the Vita.

There are some limitations.  For one, there’s only one save available on the cloud per user.  In other words, you can’t upload both a franchise save and a Road to the Show save at the same time.  You can upload either one, but not at the same time.  The other limitation is that in-game saves can’t be uploaded to the cloud, which seems to contradict the ad campaign running on television at the moment.  It’s a little annoying when you’re in your living room but have to finish a game on the Vita before transferring to the PS3, but it’s not the end of the world.

The power of the PS3 in the palms of your hands! Mostly.

It helps that the two versions of The Show are pretty similar.  Visually, the PS3 version is superior.  It’s most noticeable in the textures as everything just has a nice coating to it.  There’s also some minor frame-rate drops on the Vita version during some animations, mostly batter walk-up ones for some reason.  It’s more of a presentation issue than anything.  The Vita is also limited slightly in the control department, though San Diego Studios tried to compensate for this by adding touch controls.  I haven’t used many of them, but also haven’t felt my gameplay experience hindered much by absence of the R2 and L2 buttons.  I do like the touch controls for pitching as riding the train can make precise pitch locations a little challenging.  If you wish, you can simply touch the screen where you want the pitcher to throw the ball, then use the buttons to deliver the pitch.

The game itself is pretty similar to past versions.  There’s some new controller configurations for both hitting and fielding that I personally have no use for.  I stick with meter pitching and zone batting, and it’s plenty hard enough as is.  Hitting is particularly challenging and takes a lot of practice, especially if you’re like me and haven’t played a baseball game in a couple of years.  I’ve only used franchise mode, exhibition, and practice.  I assume Road to the Show is pretty much unchanged.  Franchise mode has actually been simplified to a certain extent when it comes to ballpark upkeep, but roster management has become more complex.  The added complexity makes the game more authentic, but just be careful when using the “Auto” function when it comes to roster moves.  Sometimes it’s tempting to let the CPU auto-fill your Double A or Triple A lineup but sometimes it takes way too many liberties and makes changes to the MLB roster, which can be unwelcome.  I made the mistake of simming Spring Training in one year of my franchise and found my roster turned into a disaster by the AI management. 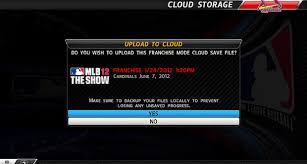 Uploading to the cloud (or downloading from it) is about as simple as this image makes it look.

I hear online still sucks, but I haven’t tried it myself since I’d just get thrashed.  Online being laggy and unplayable is unfortunately nothing new for this series.  It’s borderline criminal that they haven’t been able to fix it over the years, but I guess it’s on us at this point.  I mentioned in my last post that Sony also chose to knock 20 bucks off the price of the Vita version if bought alongside the PS3 one.  This makes sense since Sony wants people to experience the cross-platform play.  It still means it will set you back 80 bucks for the full MLB experience.

Is the novelty of being able to bring the console experience to the road worth the price?  Depends on how much you like baseball, I suppose.  I really like baseball, though even I have to admit this is probably a one-time thing for me.  It’s a cool thing to have, and the game runs well enough on the Vita to not diminish the experience much, but it’s still 20 bucks just to play your franchise or other single player mode on the go.  Though now that I think about, 20 bucks for a full-fledged portable baseball game isn’t really that bad.  I guess everything depends on your outlook!

This entry was posted on Monday, March 12th, 2012 at 8:45 pm and tagged with cloud feature, gaming, sports and posted in Sports, Video Games. You can follow any responses to this entry through the RSS 2.0 feed.
« Playstation Vita (Helpless in the Face of New Technology II)
Epica – Requiem for the Indifferent »