From time to time I like to break format and post my thoughts on a current game or album.  It helps to keep things interesting, and even though I love things from my past, I’m actually a pretty forward thinking individual.  And lately I feel like this blog has become a video game one because there’s just been so much to talk about where games are concerned.  Which makes this a perfect time to post a new entry on something that’s both current and not a video game.

2011 was not a banner year for music.  At least, not for me.  I made a couple of posts on new albums in 2011 but none were glowing.  And it’s a shame because there was some stuff in 2011 I was really looking forward to, most notably Opeth’s latest album Heritage.  Heritage ended up being a bit on the underwhelming side.  There was some good stuff, but it fell short of my admittedly lofty expectations, and it had nothing to do with the lack of any true metal moments on the album.  There were some albums that impressed me to various degrees.  Symphony X released Iconoclast and the double album version is an enjoyable listen.  Mastodon’s The Hunter was a big surprise for many as the prog-metal masters decided to go in a more rock n’ roll direction.  I enjoyed it, though it lacks true staying power.  Devin Townsend released two albums under the Devin Townsend Project moniker that had their pluses and minuses.  Deconstruction was an abusive, relentless, heavy piece of music that’s so destructive it borders on unlistenable.  Fantastic in small doses, but tough to digest as a whole.  On the other hand, Ghost is extremely accessible and damn near dull by comparison.  There are some moments where Townsend stumbles on some truly memorable hooks and melodies, though ultimately the album’s style is not my kind of thing.

Sneaking in at the end of the year though was the latest album from Finnish symphonic metal maestros Nightwish; Imaginaerum.  It had been over four years since Nightwish’s last album (and first without longtime vocalist Tarja Turunen) Dark Passion Play and I’m sure the die hard fans were eager for something new.  I’ve never been among the die hards and only own two Nightiwish albums in addition to this one, Once and Dark Passion Play.  Nightwish is a band I’ve often enjoyed in small doses.  Keyboardist and lead composer Tuomas Holopainen has always had a gift for composition, especially when crafting a chorus, but has the tendency to over dramatize the music.  This can, at times, give Nightwish a pretentious air to it.  Not that such a feeling is bad in itself as many bands convey that sentiment as well (Tool and Opeth immediately come to mind), it’s just that Nightwish goes for an almost Hollywood sound that doesn’t agree with me all the time.  Often I actually find myself enjoying their more complex pieces and only some of the considered accessible stuff.  The ones I enjoy the least tend to be the heavier tracks where the band almost tries to be too metal.  My least favorite track on the last album was “Master Passion Greed” which just so happened to be the heaviest. 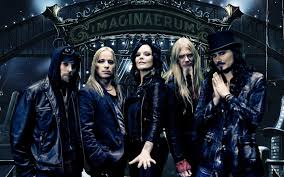 Nightwish also has a reputation amongst the metal community as being “girl metal” or other terms too derogatory for me to list.  I kind of get it, the metal community is always going to be this ultra macho thing and women always have a harder time winning over a metal audience than men.  Especially women who earn the label of pop singer.  Nightwish has also invited drama in the past with their handling of Tarja Turunen’s dismissal by publishing an open letter to her on their web page.  The whole scenario had a very high school feel to it and I legitimately felt bad for newcomer Anette Olzon who had to walk into this mess, though I’m sure she’s been well compensated for the aggravation.  Olzon has had a seemingly difficult time winning over the fans as her vocals are more “poppy” than Turunen’s operatic vocals.  I find them too different to really compare to one another, but Olzon is by no means a deficient vocalist and the music the band is producing now suits her style quite well.  I’m closer to 30 than 20 these days and labels like “girl metal” are juvenile and, quite frankly, beneath me.  Good music is good music, and I don’t care about labels (I’m listening to country while writing this), and Nightwish has made a better album in 2011 than Megadeth, In Flames, and just about everybody else.

That said, Imaginaerum is one finely crafted piece of art and would be considered such no matter what year it was released in.  This is the first Nightwish album I’ve listened to from start to finish and can honestly say I enjoy every song.  I don’t love every part of every song, but this is a complete album and quite possibly the best of 2011.  It’s a concept album and Holopainen explains it as being from the point of view of an old composer looking back on his life.  This seems to take the form of the protagonist longing to be a child again where imagination rules supreme.  There are many references to fairy tales and folklore and the album has a story book quality to it.  The first single and second track, “Storytime,” captures this beautifully.  If the opening track “Taikatalvi” is an intro then “Storytime” is the launching point.  It’s a catchy, bombastic song with the type of chorus Nightwish is adept at crafting.  Seriously, if I made a list of the 10 catchiest choruses I’ve ever heard there’s a good chance Nightwish would have as many as 5 of them.  Holopainen seems to be well aware of this strength as just about every song is chorus heavy and the band is not above doubling or tripling up on the chorus to close out a track.  My only complaint with the lead single is the speed at which it shoots on by.  It almost sounds like the vocals have been artificially sped up.  As a result, this one had to kind of grow on me even though it’s supremely catchy. 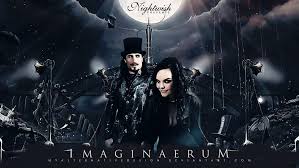 With "Imaginaerum" the band is going for a creepy, fairy tale vibe which has shown up in the artwork.

There are some heavy tracks too, and the third track is one of them.  “Ghost River” is perhaps the most experimental track on the album as it contains some odd time changes.  It’s hard to digest on the first listen due to its placement in the album, but it has its own hooks that will eventually take root.  “Slow Love Slow” is the only track that falls a bit flat for me.  Nightwish attempts an old style lounge song with this one that doesn’t quite fit.  It does start off well, and vocalist Anette Olzon proves more than capable for the material, but the band doesn’t really know where to take the song.  It almost sounds like they want it to have a more bombastic second half but there’s restraint in the air.  Even Olzon sounds like she doesn’t really know what to do with the vocals towards the end and the song never reaches the crescendo it seeks.

“I Want My Tears Back” is the album’s most accessible song.  Similar in structure to “Wish I Had an Angel” from Once, it’s a faster number that gives considerable room for bassist Marco Hietala to stretch his vocal chords.  The song’s title makes it sound like some teenage angst song, but it’s a reflection on nightmares with the twist that the protagonist is sad dreams can no longer frighten him.  It almost seems like fluff on the first listen, but it’s too catchy to remain so and I like the interesting angle the lyrics put on the song.  “Scaretale” is anything but conventional and is the album’s most daring track.  It’s a circus with Olzon producing the creepiest, scariest vocals she can.  She doesn’t cheapen out by just using a growl she just creates this maniacal persona that’s insanely fun to listen to.  Hietala does the same, but to lesser effect.  It’s certainly a wild one!

The album has an extremely well-rounded second act.  “Turn Loose the Mermaids” is a celtic kind of ballad that has its moments, while “Rest Calm” is a doom-laden track with some wonderful layers.  “The Crow, the Owl, and the Dove” is a more traditional ballad that has a nice vocal duet between Olzon and Hietala.  It’s one of the simpler compositions on the album but extremely effective.  “Last Ride of The Day” is fittingly a roller coaster of a track with a fist-pumping, bombastic chorus that will likely delight live audiences on the tour.  “Song of Myself” is actually one of the more disappointing tracks for me.  It starts off flawlessly and feels like it’s building towards something fantastic before it just kind of gets ground to a halt halfway through.  The rest of the “song” is just spoken word and where Nightwish decides to overdue the pretentious angle.  There’s nothing particularly worth saying within the spoken word section and it goes on for over six minutes.  I kind of wish it either wasn’t there or was considerably shorter.  The final, title track is just an instrumental medley of the entire album that’s actually pretty enjoyable, and I’m not usually one for instrumentals. 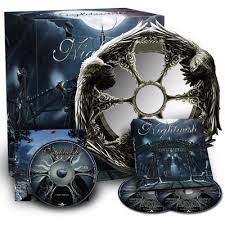 As with most releases these days, numerous special editions exist for the collector market.

The band’s playing is also top notch here.  The lead guitar riffs have a stronger presence and more variety than what was on Dark Passion Play as Emppu Vuorinen is given plenty of room to breath.  Holopainen’s keys are consistently strong and actually aren’t the overbearing presence they sometimes are on other Nightwish compositions (call it the Steve Harris effect where the main composer is perhaps too audible in the song at times).  Most of the tracks contain some kind of orchestration, and like with their previous albums, these are real orchestras and not electronic.  The album has a rich and full sound as a result.  Olzon’s vocals are wonderfully diverse and she’s really given room to express herself on several tracks.  At times it felt like Dark Passion Play’s songs weren’t crafted to fit her strengths while every track on Imaginaerum has been.  Hietala’s vocals are also quite good and more dynamic than they have been in the past.  Musically there’s plenty of celtic influences sprinkled about as well as a Danny Elfman influence on others.

The album is wonderfully arranged and even tracks that sound out of place on the first listen start to make sense on subsequent ones.  Imaginaerum is a rollicking journey through the fantastic that proves quite charming and a real joy to experience.  Nightwish’s older records never grabbed me like this one.  And even though the Tarja vs Anette debate likely rages on amongst Nightwish fans I consider this Nightwish’s finest hour.  It’s actually really hard to even pick a favorite track off of this one as I tend to enjoy all of them for different reasons.  This is a surprise favorite of mine for 2011 and I hope to get a lot of milage out of it.

This entry was posted on Saturday, February 4th, 2012 at 7:51 pm and tagged with anette olzon, best of 2011, devin townsend, mastodon, nightwish, opeth, symphonic metal, symphony x, tarja turunen, tuomas holopainen and posted in Music. You can follow any responses to this entry through the RSS 2.0 feed.
« Requiem for the PSP
Circle Pad Pro: Revelation or Ruination? »