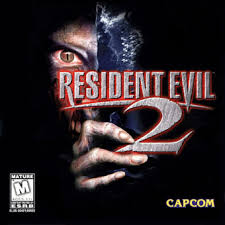 Recently I was having a conversation with someone about all things Resident Evil.  I recalled fondly the survival horror component of the original titles, the horrid controls, and lackluster voice acting.  We recalled the cheap scares, scarce ammo, and the at times punishing difficulty.  We remembered it all, the good and the bad.

Resident Evil arrived when developers were still trying to get a hang on this whole 3D thing.  In the original, you could play as Chris or Jill, agents for an elite combat force known as S.T.A.R.S. and were tasked with navigating your way through a treacherous old mansion.  Both characters handled like tanks.  Left and right on the Playstation’s d-pad would pivot the character while up or down would move the character.  Holding down a button would make the character run and while running it was possible to turn slightly, though to make a hard 90 degree turn you had to bring the character to a complete stop.  One of the shoulder buttons would ready the character’s weapon and the action button would make them fire.  There was no lock on technology of any kind, you pointed and shot in all directions.  Running and gunning Contra style was out, your agent had to stop if he/she wanted to fire off a few rounds at a zombie or two.

The controls were a gigantic obstacle for players.  Most of the game’s difficulty stemmed from trying to maneuver amongst the many enemies that filled the rooms.  Other than the zombies, most of the enemies were far quicker and agile than either Chris or Jill.  It would have been easy to just pull out the biggest guns and have at it, but ammo was so scarce the game practically encouraged you to run away from most encounters.  That’s where the survival component came into play.  Only when backed into a corner was it wise to pull out a bazooka or flame thrower.  And using anything other than a pistol on a zombie was a rookie mistake.  Health was scarcer than ammo and often you were forced to gamble when in a caution state and hope for the best rather than use a precious can of first aid spray.

Resident Evil had many warts, but it managed to be so compelling in spite of them.  Likely because the only game to come close to matching its atmosphere was the under the radar Alone in the Dark for the PC.  The first RE wasn’t really a critical darling, but managed to sell well and hype for an eventual sequel was running high. 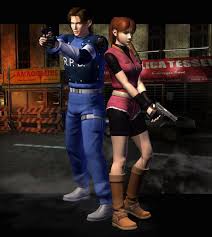 Enter Resident Evil 2.  Released in 1998 for the Playstation, Resident Evil 2 kept what worked in the first game and also kept a lot of what didn’t.  Namely, the controls were just as cumbersome as always and the voice acting wasn’t much better (though it at least wasn’t laughably abysmal).  Maybe because gamers and reviewers had grown accustomed to the game’s controls, the sequel was able to garner better reviews.  The visuals were improved and Raccoon City was a more varied setting for new comers Leon and Claire.  The main game was shorter, but a new mechanic was added that encouraged replaying the game multiple times.  Each character had an A and B game, depending on which character was used first.  For example, if Leon was chosen from the onset, completing his game would open up Claire’s B game.  Some items crossed-over, meaning if you didn’t pick them up in Leon’s game Claire could get them.  There was also one room that could only be accessed in the B game if certain conditions were satisfied in the A game.  The B game was also a great deal harder.  Beating both A and B games with an “A” ranking on one would open up a third scenario where you played as an Umbrella trooper named Hunk in a more action-oriented environment.  Beating the game 6 times opened up a fourth scenario where you played as a piece of tofu who could only wield the knife (more of an achievement than a viable gameplay mode).

The game looked better than the original, and holds up quite well today for a Playstation title.  The presentation was more “Hollywood” than the previous game with FMV sequences and other scripted events that heightened the drama of the game’s rather B-movie quality plot.  There were big boss encounters and moments that really made you jump in your seat. 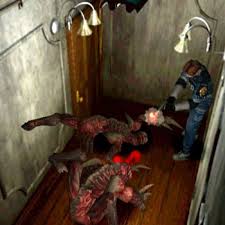 While it wasn’t all that much different from the original game, I found RE2 far more enjoyable.  I’m not really sure what it is, maybe it just had to do with me spending more time with the sequel.  With the first game, I only ever rented it with friends.  As such, I never quite got a good grasp of the controls and found the game frustrating.  With RE2, I fell for the hype and picked it up when it was released.  I played through the A game easily enough though it would take me awhile compared to later play-throughs (probably close to 5 hours).  The B game though, that was a challenge!  That’s the one that had the big trench coat guy who would pop up from time to time to scare the crap out of you (and dish out some pain as well).  My first attempt at it was also with Claire who I found more difficult to play as given her unique weapons compared with Leon’s (her bow gun had only one use, pinning crows to the walls).  The boss fight with RE2’s version of the Tyrant character from the first game was especially difficult.

I stuck with RE2 though, and eventually I was blazing through the game in about 2 hours.  It was always rewarding to see my play improve.  When I first started playing the game I’d try to shoot my way through, but repeated attempts had me weaving in between zombies and other enemies and using as little ammo as possible.  Tyrant?  No problem.  I memorized the location of every key or other special item and unlocked the bonus games.  I beat RE2 almost as thoroughly as one could, outside of beating the Tofu game (that one is beyond my skill, though I admittedly never gave it much of a try).

The enjoyable part about it is that I didn’t really play the game to unlock those additional game modes.  I didn’t keep playing for some silly achievement or virtual trophy, I played it just because it was fun.  It’s the amount of enjoyment I received from playing this game that has earned it a place in my top 10.  Future games in the series have far surpassed it from a technical standpoint.  Controls have been improved and the plot has taken the protagonists all over the world.  Truthfully, the best game in the franchise is probably Resident Evil 4, but the game I’ve enjoyed the most has definitely been Resident Evil 2.

This entry was posted on Monday, November 21st, 2011 at 9:52 pm and posted in Greatest Games, Video Games. You can follow any responses to this entry through the RSS 2.0 feed.
« Batman: Mask of the Phantasm
Skyrim Impressions »