I’m nearing the end of my list of my ten favorite albums and coming in at number 2 is an album that could easily be number 1.  I am speaking of an album that could, and perhaps, should be at or near the top of many lists, rock n’ roll’s most recent and perhaps last masterpiece, GNR’s Appetite for Destruction.  Appetite… is the biggest selling debut album for a rock band, though success was not found over night.  It took a good year after the release for Guns N’s Roses to become a household name.  Some credit for this is given to the band’s exposure opening for Aerosmith after the album’s release while more credit is probably given to MTV’s repeated airing of “Sweet Child o’ Mine,” the album’s third single and the band’s lone #1 hit.

I think a lot of the album’s success had to with timing.  In 1987 the glam rock thing was still prevalent but dying a slow death.  The androgynous look of the bands, while at first shocking and rebellious, had become stale and people were recognizing it as the fad that it was.  It was shallow and unsustainable, so it comes as no The intended cover for Appetite was rejected by the label, though it did appear in the album's booklet and inner sleeve.

surprise that a band was able to capitalize on its downfall.  Guns N’ Roses was a product of that scene.  Formed in LA as a merger of the two bands Hollywood Rose and L.A. Guns, the band toiled away on the club scene for years before finally getting a record deal with Geffen.  Sick of the current scene, the band strayed from the pack and took a hard rock approach that toed the line of heavy metal.  Frontman Axl Roses’s screeching vocals and guitarist Slash’s talking leads gave the band its signature sound.  The combustible nature of the band was obvious to all onlookers and its self-destructive behavior lead many to predict a short lifespan for its members.  This made many labels wary of signing the band as no one knew how long it would last.

While Axl and Slash gave the band an identity, it was arguably guitarist Izzy Stradlin that solidified the group and gave it direction.  It’s Stradlin that receives the most song-writing credits and is often cited by Axl as the driving influence of the band.  Stradlin would also be the first to depart of his own free will following the band’s follow-up LP’s, but here his presence is felt. 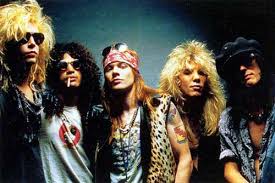 The album’s opening track, “Welcome to the Jungle,” was like a salvo aimed directly at the glam crowd and pop rock that dominated the landscape.  Axl’s tortured screams and vocal lines were direct and impossible to ignore, and the accompanying video took a tongue in cheek approach at criticizing the current MTV generation.  Axl doesn’t so much as sing the song’s lyrics as he does spit them out.  Venomous and biting, they tare through the sonic wall created by the guitars and sustained by the rhythm section.  Everything comes down and breaks into a lighter, almost optimistic mid-section that caves in on itself quickly.  Track two and the album’s first single, “It’s So Easy,” is a track offensive to most but represents the band’s experiences with groupies and suck-ups.

The album is not titled Appetite for Destruction because it sounds cool, but because it describes the band’s existence.  Songs about drugs and consumption were not there to glorify the lifestyle like glam intended, but were just honest portrayals of the self-destructive behaviour that nearly killed the members of the band in the years to follow.  Violence and anger give way to some tender moments.  The album’s most popular track and seminal ballad, “Sweet Child o’ Mine,” is very much a love song that was admittedly hastily constructed.  When Axl sings the line “Where do we go now?” he wasn’t describing the relationship between the song’s characters, but honestly didn’t know where to go with the song.  The riff was a warm-up riff used by Slash and nothing he even intended to record but Axl liked it and the song made the record.  Success is like that sometimes.

Tracks like the aforementioned “It’s So Easy” and “Mr. Brownstone” show off Axl’s vocal dexterity. Axl has become known for being a singer with multiple voices and 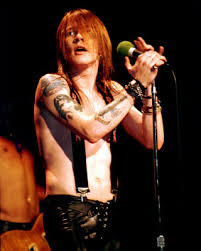 Axl Rose not only established himself as one of rock's greatest frontmen, but also as one of its most volatile personalities.

on those tracks he goes with his deeper voice instead of his high-pitched rasp.  The effect works well, especially as the song builds towards a thrilling climax where Axl is able to unleash his scream.  For me, “Nightrain” is one of the standout tracks.  It’s kind of an old school rocker but finds a nice rhythm as it weaves its way through its 4 and a half minute duration.  “Think About You” is the forgotten track of the album, a really infectious and up beat song about an old flame that features great lead work by Slash.  The album’s closer is the one most often cited by critics as the jewel of the album, “Rocket Queen” features the most complex time changes of the album.  It starts off as an egotistical rant that leads into a second act of surprising sweetness.

Sex, drugs, and rock n’ roll all dominate the GNR landscape.  It’s kind of sad that after Appetite… GNR was pretty much finished.  Urged by Geffen Records to get as much material out of the band as possible before it self-destructed, burn-out inevitably set in.  Sure the double LP Use Your Illusion sold quite well and produced some famous tracks, but it pales in comparison with Appetite for Destruction.  After UYI, the band would only release one more album, the dreadful collection of covers known as The Spaghetti Incident.  By then the band members weren’t really on speaking terms with Axl, and all of them would eventually be dismissed by Axl whom earlier had managed to get them all to sign over the naming rights of the band to him.  Chinese Democracy was released in 2008 after numerous delays but everyone seems to recognize it as the Axl Rose solo album that is is.  It, not surprisingly, can’t hold a candle to Appetite for Destruction and isn’t even worthy of comparison. 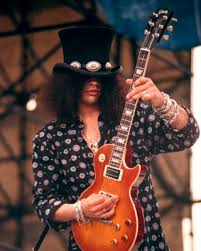 Often seen with his signature top hot and sunglasses, Slash gave the band a unique sound on guitar that has withstood the test of time.

It took a perfect storm to create Appetite for Destruction.  A collection of hungry, disillusioned youths created the album over many years.  Other bands would follow with a similar profile, most notably Nirvana.  Like Guns N’ Roses, Nirvana achieved great success early on and was inevitably undone by the weight of expectation.  Nevermind was a great critical and cultural success, but ultimately not as impactful stylistically on the genre as Appetite… was, even if the media decided to make up a whole new label to place Nirvana and other similar bands under.  Success and excess bread laziness which is why the band had such a hard time coming up with new material following the album’s release.  In the end it doesn’t matter.  Even if the band had never released another track, Appetite for Destruction had already secured their legacy as one of the greatest hard rock acts to ever be.  It contained everything that makes rock n’ roll so unique and so special.  It’s rebellious, uncompromising, fast, slow, and everything in between.  It sounded like no other and nothing to follow has sounded quite like it.  There’s no filler and no one track that rises above them all.  It is, in almost every way, absolutely perfect.  A truly amazing achievement.