Opeth is not my favorite band, but Opeth is what I consider the most important band in heavy metal music today.  Not content to hold themselves to one genre or one sound, Opeth is a trend-setter  that has been putting out material for over 15 years with no signs of slowing down.

Opeth is the rare band that contains none of the original members.  Formed in 1990 by Dave Isberg in Stockholm, Opeth started off as a traditional death metal band.  Not long into its life, bassist and former band-mate of Isberg’s Mikael Åkerfeldt joined.  Apparently the rest of the band hadn’t been consulted when Isberg approached Åkerfeldt about joining Opeth and this lead to a lot of in-fighting with the end result being everyone leaving the band with the exception of Isberg and Åkerfeldt.  After a few directionless years, Isberg would eventually exit of his own accord leaving Åkerfeldt with song writing and vocal duties.

By now Åkerfeldt had switched to guitar and combined with his good friend Peter Lindgren to form Opeth’s twin guitar attack.  Under Åkerfeldt’s direction, the band became more than just another death metal outfit and soon began incorporating acoustic guitars and 70’s type melodies in their songs.  They kept enough of the death metal elements to keep their street cred intact and were signed to Candlelight Records in 1994, releasing their first album Orchid in 1995.

Opeth’s debut was met with critical acclaim, as was the follow-up Morningrise.  Opeth had established an identity for itself in the metal word.  Long songs that twisted and wound their way through complex melodies and time changes marked by the duality of Åkerfeldt’s vocals which switched from brutal death growls to high melodious tones at the drop of a hat.  The band received a bigger budget for its third release, and settled on drummer Martin Lopez, which lead to an overall better production sound.  The result was the band’s breakthrough album My Arms, Your Hearse; an album that further refined the Opeth sound and provided the blue print for every subsequent release. 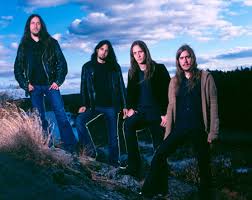 Opeth as it appeared in 1999. Since then, only Åkerfeldt and Mendez are still with the band.

It was as a firmly established and confident band that Opeth took to the studio to record its fourth and perhaps greatest album, Still Life, in 1999.  The lineup from the previous release was still in tact, and bassist Martin Mendez was now on board.  Opeth was on a new label, Progressive, and received producer credit on the album as well along with producer Fredrik Nordström who had worked with the band on My Arms, Your Hearse.  Still Life was conceived as a concept album about a man returning to his home, after being banished as a heretic, to reclaim his long-lost love, Melinda.  Melinda has since been brainwashed by the cult that has taken hold of the village and the protagonist tries to release her from her enslavement.

Keeping with tradition, the album’s running time exceeds the one hour mark despite only containing seven tracks.  The album’s opener and fan favorite, “The Moor,” clocks in at nearly eleven and a half minutes making it the longest song on the album.  It opens with a sweet yet haunting acoustic guitar melody that distorts and devolves into low-tuned electric riffing. Åkerfeldt’s grunts come in, tortured and screaming, to add a coat of unease to the song’s mood.  True to Opeth form, it changes up at the bridge and brings back the acoustic parts before reverting back to the death sounds for the song’s frenetic outro.  The second track, “Godhead’s Lament”, picks up right where “The Moor” leaves off with high-tuned lead guitar riffing and guttural screams.  The song builds upon itself until it reaches the chorus where Åkerfeldt’s “clean” vocals come in to layer personality onto a surprisingly light and catchy chorus.  The song becomes an acoustic talker before coming back to the electric guitars and ends on an extended version of the earlier chorus.

By the time the album hits track 3, over 20 minutes have elapsed and first-time listeners are breathless and clueless about what could possibly follow.  Opeth evokes its inner psychedelic rock persona for parts of the next three tracks as Åkerfeldt leaves no doubt about his singing ability beyond the death grunts.  So melodious and soothing are some of the songs in the album’s middle that it almost seems as if Opeth wanted to remind everyone of their roots, so they unleash the well-titled “Serenity Painted Death” on track six before closing things out with the ten minute “White Cluster.”

At the album’s close the listener is not left wondering if Still Life is a good album, they’re left to wonder if it’s the best album they’ve ever heard.  The pacing, variety, complexity all combine to create an unforgettable experience.  The most incredible aspect of the band is that there are many who consider Still Life to be the band’s second, third, or even fourth best release.  The follow-up, Blackwater Park, is every bit as good if not as ground-breaking, while 2005’s Ghost Reveries is perhaps the band’s most technically impressive record to date.

Not content to just put out great records, Opeth has also firmly established itself as one of the best live acts in music today.  Their brilliance live nearly renders their live DVD’s and CD’s irrelevant, because they sound almost exactly like the studio 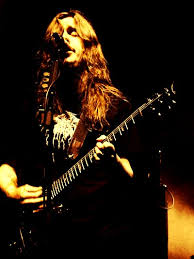 Opeth is composed of many great musicians, but it is guitarist and vocalist Mikael Åkerfeldt at its creative heart.

releases.  Though that may render the live recordings a bit boring, Opeth is definitely not a band to miss when they come around on tour.  Of all the bands I have had the pleasure of seeing live, Opeth is second only to Iron Maiden, and that’s only because of Maiden’s well publicized stage props.

Opeth is at present enjoying its highest profile ever.  Not only is the band metal’s most talented but also one of the most commercially successful.  Of course, this isn’t felt in the US as much as it is in other parts of the world.  The band is working on its next album with the goal being to have it released at some point in 2011.  I fully expect it to be every bit as good as their previous efforts, including the ground-breaking Still Life.  So long as Opeth continues to meld death and beauty, talent and taste, they will remain metal’s most significant recording act.