Kamelot is a relatively new obsession for me.  I had the pleasure of doing college radio years ago (when appropriately enough, I was attending college) which was an excellent experience and a great way to hear new music.  For anyone embarking on that part of their life, I whole-heartedly recommend it.  That is assuming all college radio stations are as good as WKNH in Keene, NH.  WKNH had a great selection of music including an expansive library of my preferred genre; metal.  I was also fortunate to be allowed to play whatever I wanted so long as I met the station’s quota of five new cuts an hour.  During my time there I was able to find several new bands that would become among my favorites, one of them was Kamelot.

Kamelot is actually an American band from Florida, though their frontman as of their third disc is Norwegian born Roy Khan.  Despite being from the US, Kamelot is far more popular in other parts of the world than here.  That’s primarily due to the fact that the only metal that gets any attention over here is Metallica and latest flavor of the month.  I don’t mean to sound like an elitist snob but the metal scene in the US is awful, uninspired, and banal.  Kamelot blends multiple sub-genres of metal to create a unique experience.  The band started off as a fairly standard power metal group but evolved into a quasi-prog outfit, only without the pretentiousness.

While I was exposed to Kamelot during my college years, I didn’t become a card 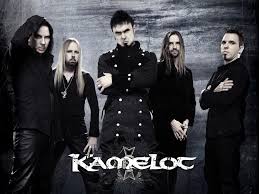 Kamelot has been around since 1991, but it didn't truly take off until the addition of vocalist Roy Khan in 1997.

carrying member of the Kamelot fan-base until recently.  Most would probably say their best album is The Black Halo, and it’s hard to deny otherwise, but for my money I’m going with Karma.

Karma is the band’s fifth full-length album.  Released in 2001, it could best be described as symphonic metal.  There’s a certain theatrical flair to a lot of the music present on the disc.  It’s the perfect run-time for a full length at just under an hour and it contains a diverse section of music.

The opening number, “Forever,” is a soaring piece of catchy power metal tastefully done.  Power metal and taste do not often go together but Kamelot has made a career out of doing so.  Songs often contain a catchy chorus not over-exposed.  It’s easy for a band to ride a chorus, often having it repeat itself two, three, or more times at the song’s outro.  Kamelot almost never indulges in such a practice, almost to the detriment of some songs.  There are times where I wish they’d drive a chorus into the ground, because they’re just so good.  Particularly on the song “The Light I Shine on You,” but in the end I know their approach is for the best.  It just means I have to listen to the track again.

Kamelot throws in a couple of ballads to keep things in perspective, “Don’t You Cry” being the stronger of the two.  It’s a song guitarist Thomas Youngblood wrote about his father, whom apparently passed away when Thomas was very young, and as a result, has little or no recollection of.  The album has a big closing number, the three part “Elizabeth” which centers around the part true and part myth story of Elizabeth Bathory.  It’s a cool number but one I don’t think quite meets the band’s expectations.  It definitely works best as one long song, even though it’s divided into three tracks.  The title track is one of the band’s absolute bests.  It combines imaginative story-telling with great pacing and a typical Kamelot chorus, a staple of the band’s live set to this day.

I don’t feel like I have completely captured how great I think this album is, and that’s probably because at it’s heart it’s a pretty simple and straight-forward album.  For me, it just hits all of the right notes and walks that fine line between sophistication and bombast.  Kamelot is a really tight band and vocalist Roy Khan is among the genre’s most talented.  Not only is Karma perhaps the band’s best release, it’s also a great jump-in point for people new to the band.  The albums that follow are even more diverse and complex.  Khan is currently sorting out some personal problems that’s preventing him from touring in support of the more recently released album Poetry for the Poisoned.  Hopefully he can get things straightened out and rejoin the band as there’s still a lot of great music left in this outfit.