Everyone loves a good top 10 list, of that I am certain.  They’re especially prevalent in the sports world and comedy duo Wayne and Garth had more than a few good ones. 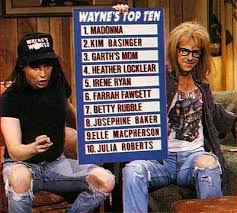 A list by itself though is pretty bland so I’m going to devote a blog entry for each item.  The subject will be my personal top 10 albums.  The only criteria was personal taste.  Any music scholar will certainly include The Beatles on such a list.  Actually, it wouldn’t be a question whether or not The Beatles would make the top 10 but how many albums would?  I however don’t particularly care for The Beatles so that band will not be making an appearance on my top 10.  I certainly can acknowledge the importance of The Beatles and I do like some songs here and there, but nothing by them is near and dear to my heart.  It must be a timing thing.

Which leads to the list itself and the process I undertook to whittle it down to 10.  I first just started writing down the first albums that came to mind, when I ran out I consulted my own library to see if I missed anything.  This left me with 20 or so albums that I wanted to trim to 10.  I circled the ones that were no question definite favorites of mine, which came to 7.  I then did essentially the opposite and started eliminating the ones that I enjoyed immensely, but knew weren’t quite good enough to make my prestigious list.

The last 3 were the hardest but after making some tough decisions I arrived at my top ten.  I wasn’t too surprised at my final draft and I feel really good about my selections.  I did notice some interesting artist omissions though so to sort of compare I did the same exercise over, but this time for my top 10 favorite bands/recording artists.  The end result was that two of my ton ten albums are by artists that didn’t quite make my personal top 10, while three of my favorite artists did not produce an album worthy of my list (one artists managed to get two albums into my top ten, thus why there are two missing albums and three missing artists).  The three that don’t have a representative in my top 10 albums:  The Misfits, Iron Maiden, and In Flames.

The Misfits is an easy one to understand.  While their volume of quality songs is impressive, most of them

Originally recorded in '78, this album didn't see the light of day until 1997.

were released on two or three song EP’s.  Their best album, Static Age, was a tough omission for me but it’s also not a true album as it was recorded in ’78 and released in pieces over the years before the entire session was captured on the 1997 album.  Really, the only full length album (not including the re-formed band in the 90’s) is Walk Among Us, and while good, isn’t quite that good.

Iron Maiden is a group I have a strong affection for.  A great live act that, if nothing else, has certainly withstood the test of time.  They’re quite fascinating in that they’ve had a huge resurgence in popularity over the last decade without the benefit of any airplay on radio or music video channels in the US.  Then again, Iron Maiden’s entire career has been like that so maybe it isn’t that remarkable.  What is strange is that in over 30 years of existence Maiden hasn’t produced an album I can place in my top ten.  They’ve made some really good ones over the years, but for me even their best aren’t quite legendary.  Piece of Mind is probably my favorite, but as good as “Flight of Icarus” or “Still Life” is, there’s “Quest for Fire” and “To Tame A Land,” two songs I find to be severely lacking.  Feel free to disagree. 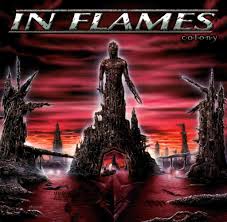 A great album, for sure, just not quite great enough.

In Flames just barely missed out on my top ten, Colony would probably be number 11 if I wanted to stretch my list out and Come Clarity is right behind.  Colony was the first album from this Swedish group that I heard and it instantly captivated me from the first track on.  It does lose a little steam midway through but finishes strong.  Come Clarity was a comeback album of sorts for the group following the dismal and unimaginative Soundtrack to Your Escape.  Start to finish, it may be a stronger overall effort than Colony but it doesn’t have the peak and I do prefer their older sound to their more modern one.

So that was my process.  Perhaps I’m taking this too seriously but it’s my blog so I’ll do whatever want.  I’ll make my first entry on this subject shortly but my next entry won’t necessarily be number 9.  I plan on revisiting the list at my leisure.  If I ran off ten straight posts on this subject it would probably grow stale and impact the quality of my posts.  I know it will be a tough wait to find out what’s #1 (though if you know me well, it’s not a surprise), but it will be worthwhile, I promise.