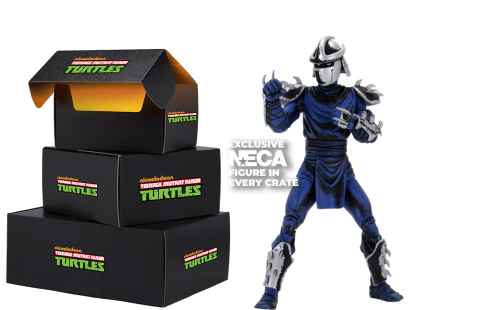 It was announced earlier this week that a Teenage Mutant Ninja Turtles branded Loot Crate was incoming later this year. NECA, or NECA’s parent company to be more exact, rescued Loot Crate from bankruptcy last year and has been aiming to revamp the subscription service by incorporating NECA product into the boxes. If you’re not familiar with the scheme (some would argue scam), Loot Crate is basically a blind box service. Each box usually retails for about $50 and the only thing the buyer knows is what the general theme of the box will be. They’re almost always advertised as being a greater value than what they’re charging, which is a ludicrous statement, and instead they’re full of junk that would be a hard sell on its own. That’s likely why the service went bankrupt, but NECA appears at least committed to making this thing worthwhile.

There was a series of essentially trial Loot Crates with the NECA branding. One such crate was the Spirit of Splinter set. It came with a variant of the Splinter action figure from NECA’s TMNT movie line that was colored blue to resemble the character from the scene in the woods where he appeared as a ghost, or spirit, to encourage his adoptive children. The crate was $50, so if you’re in it for the figure it’s not the greatest value since NECA figures retail for around half that amount. It also had a shirt, patch, pin, and a Foot bandana based on the same from the film. It’s not an awful set, but I wasn’t really into the figure so I passed. Since the property is hot though, the resale value appears relatively high on eBay so anyone who did purchase it could probably turn it into a small profit, if they so desired. 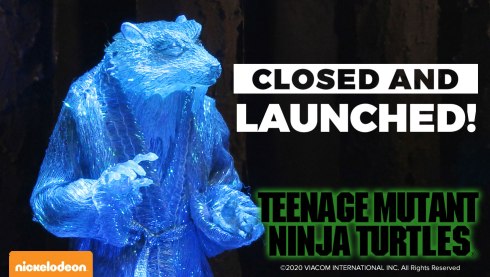 If you wanted a blue Splinter you missed your opportunity.

That Splinter set apparently was successful enough to warrant a new round of crates. Announced Wednesday, a trio of TMNT crates are set to arrive this year with the first one arriving sometime in June. The featured action figure for that set is a first appearance Mirage Shredder. This is only the second time this figure is being released as the first time was as part of a four-pack with some Foot Soldiers for San Diego Comic Con. That Shredder was also colored based on the color version of the debut issue of Teenage Mutant Ninja Turtles. This version is basically all blue and black and looks pretty neat. He’ll have some accessories as well and the crate will come with additional items that likely tie into the original comic line in some way. 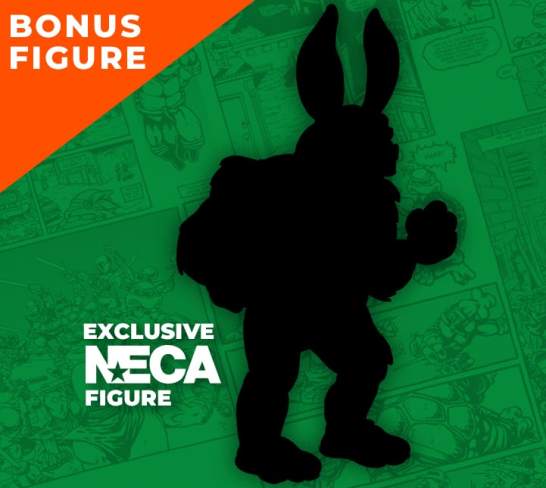 I can’t believe how much I want this.

What we don’t know, at this time, is what the featured figures will be in the next two crates. For those, NECA has provided only the theme and a few hints. Crate #2 is an arcade themed crate and the placeholder image is the Turtles battling the Foot in the first stage of the original arcade game with April in the background. NECA confirmed via its Twitter account that the figure will NOT be an arcade deco April, and since the Turtles have been released already, it won’t be them. The third crate is based on the 1987 cartoon and the placeholder image is Rocksteady. The only other info we have is that it will not be a variant of Casey Jones (some had guessed at a version of Casey in a suit). Patrons who are all-in on this trio of crates and pay for all three upfront receive a bonus figure of Bebop in a bunny suit from the cartoon. No images have been shown yet so we don’t know how much re-tooling is needed for the existing Bebop figure to conform to this. He could just have new hands and a cloth suit.

That silly Bebop was actually the thing that pulled me in. I love goofy variants, and while I’m less enthusiastic about the First Appearance Shredder I decided to take the plunge with the safety net being if I don’t really want one of the other figures, I can probably at least sell them for cost online. Even though the Bunny Bebop is the figure I covet most, it hasn’t stopped me from speculating on what the other two figures will be. The guessing game is so fun for me that I decided to put my thoughts down here, so let’s see if I can get these thoughts organized.

For the arcade wave, NECA has released or shown the following for retail: 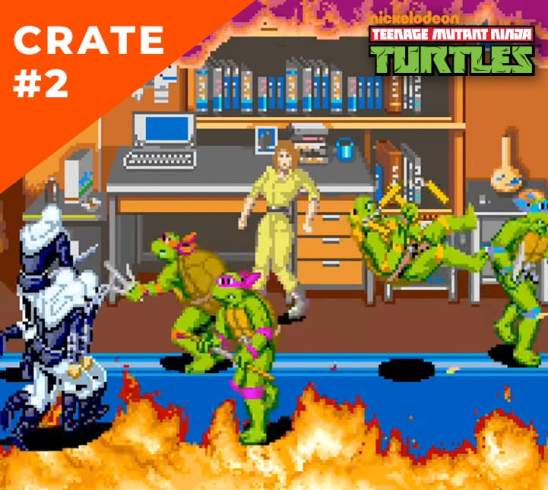 The lone hint provided by NECA for crate #2.

And as mentioned, we can rule out April. The image NECA provided as a clue is the Arcade version of the first game. It’s also the first level which featured a boss fight against Rocksteady. Also of note, NECA showed off Granitor and Traag a long time ago and has never come back and confirmed them for release. The current figures at retail are based on Turtles in Time, and Krang’s loyal rock soldiers did not feature in that game. In other words, I think they’re in play. Cartoon versions are on the way as part of wave 4 too, so we’re just talking a simple repaint here. With all that said, let’s speculate! I’m ranking based on the likelihood of who gets released: 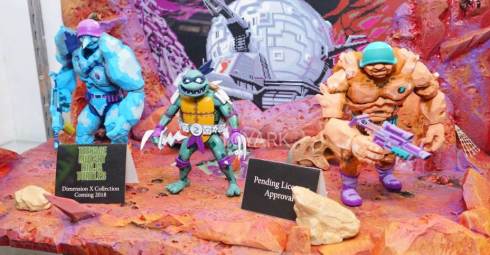 NECA showed off this trio almost three years ago and we just now received Slash. Granitor and Traag have mostly been ignored since save for the cartoon reveal.

That’s my top 5 most likely for the arcade crate. I kept my guesses to just the original arcade game and the NES release, but if it also could include Turtles in Time figures then that expands things considerably. That game features Tokka, Rahzar, and Super Shredder which are all getting released as part of the movie line. Would NECA do a pixel deco on any of them and release them? I think so, but I also think they would rather release them as single-packs to retail and not in a Loot Crate. Baxter the Fly also features in the home NES arcade port and both versions of Turtles in Time. He has a figure on the way in the cartoon line, though he’s considerably larger in the games and I’m not sure if that figure is really appropriate for a game version. Maybe NECA isn’t too concerned though. Metalhead is also in that game, so he would be possible. Krang is featured in both, but I ruled him out as his android body is probably too big for this kind of release, but I’d love to be wrong! 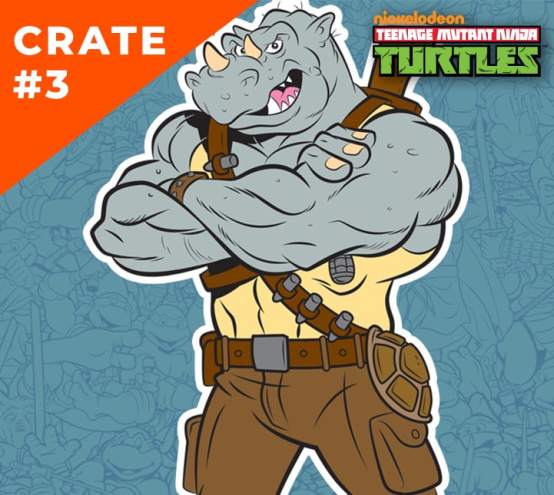 The lone hint for crate #3. Seems like Rocksteady is a given, no?

Let’s turn our attention now to crate #3. We have even less to go off of here as the image is just Rocksteady and it’s the same licensing artwork featured in NECA’s action figure release, so we don’t even have an episode or season to go off of. It wouldn’t exactly be much of a hint if the figure wasn’t Rocksteady, but for completion’s sake, here’s what NECA has done or is prepping for release at Target: 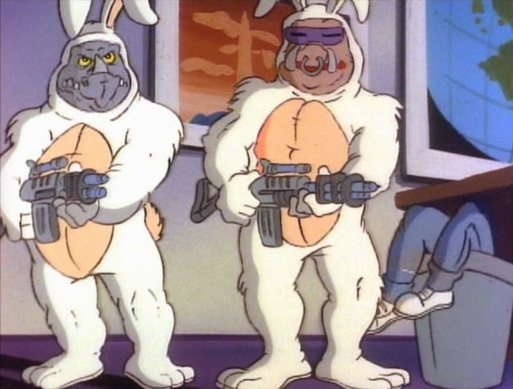 Could figure #3 simply be a Bunny Rocksteady to complete the pair for those who are all-in? Maybe, though it seems like NECA would reserve him for a future release.

That’s a lot of figures, and I may even be forgetting some. NECA has also strongly hinted that Ace Duck and Mukman and Joe Eyeball are forthcoming, and the assumption is that neither would be featured here. Again, we’re mostly assuming this figure will be a variant of an already released or soon-to-be released character. And since this crate may be arriving in the fall, virtually all figures to be released are in play. Though since the image is Rocksteady, I have to go with him first: 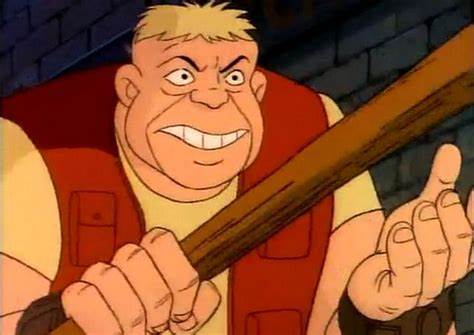 Might a human version of Rocksteady be on the way? 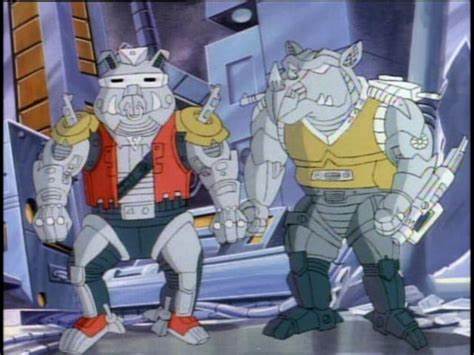 A Mighty Rocksteady would be considerably harder to pull off, but that Bunny Bebop looks like it might feature a lot of new sculpting so who knows?

That’s it, my picks for most likely figures. I hope this doesn’t come off like an advertisement for NECA and Loot Crate, but it felt like a fun exercise to undertake. I’d prefer to not have to deal with the Loot Crate nonsense to get these exciting figures, but given how hard they’ve been to find at retail it’s not the worst thing to actually know I’m guaranteed to get four new figures this year. Expect a review for each one when it arrives and I’ll definitely refer back to this post to grade how well I did.

This entry was posted on Friday, March 13th, 2020 at 1:20 pm and tagged with bebop, konami, loot crate, mirage, neca, rocksteady, shredder, teenage mutant ninja turtles, turtles in time and posted in Comics, Television, toys, Video Games. You can follow any responses to this entry through the RSS 2.0 feed.
« NECA Turtles in Time Slash (TMNT)
Catching up with MVP Baseball 2005 »