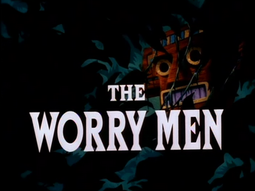 Well, it’s taken awhile, but we’ve finally arrived at the final episode of season one. The 65 episode order was initially meant to be it, but the show was such a hit that Fox ordered another 20. It terms of air date, this episode is part of season two, but I suppose it doesn’t matter. Since the order for another 20 came during production on season one, it makes me think this was never intended as a potential series finale. It stars a returning villain, who is also one of the lesser villains of the show, and is really a very stand-alone type of episode. Not a bad one or anything, just not what one would expect of a finale.

The episode opens at a social gathering. The host is Veronica Vreeland (Marilu Henner) and she has just returned from a trip to the rain forest. And just in case she didn’t get a chance to tell anyone, she is making sure people know via her attire. Bruce Wayne is in attendance and he’s hanging by the bar with a new face, Hayden Sloan (LeVar Burton), a stock broker who is a bit worried about the current economic climate. As he voices his concerns to Bruce, Veronica approaches to inform the pair that she has a way to get rid of those troublesome worries – little dolls. Sloan is understandably dismissive, but Veronica insists she bought them from a native while on her trip and swears by them. She’s even giving them out as party favors. Above, a man decked out in Mayan attire is snooping on the proceedings down below, and Bruce apparently takes notice and excuses himself.

Veronica Vreeland is back to do what she does best – throw parties!

The man continues to spy on the party-goers, until Batman surprises him. He says nothing as Batman questions what he’s doing and responds by throwing a bladed device in Batman’s direction. He has no problem avoiding the projectile and has a little retort ready for him to show he is not impressed. They do a little dance, and the Mayan Shaman eventually connects with a ball that at first misses Batman, but then bounces around to hit him from behind. I don’t know what it’s made of, but apparently it’s enough to at least knock Batman down allowing the fellow to make his escape.

At home, Bruce tells Alfred about his interesting evening. When he questions what a man dressed as a Mayan Shaman would be doing spying on a social gathering, Alfred asks if this is some question being posed by The Riddler. Bruce shares all of the info he can, while Alfred finds one of Veronica’s little dolls in his jacket and asks what it is. Bruce explains how it’s supposed to take away your worries, and Alfred is about as dismissive as Bruce regarding it, but just for fun he puts it under Bruce’s pillow. 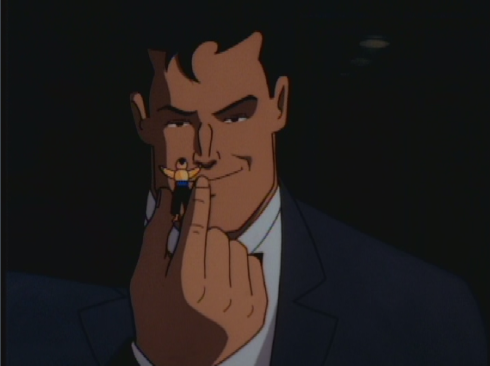 Bruce with one of Veronica’s worry men dolls.

The next morning, Bruce strolls into work in a sunny disposition while his secretary, Dana (Vernee Watson-Johnson), expresses some concern over the phone to someone. She has a briefcase for Mr. Wayne, but seems reluctant to give it to him. He takes it though and heads into his office. There he opens it to find it’s full of cash, smiles, and then places it outside his window on a ledge. He then sits down at his desk to flip through some mail when Dana comes in to once more express concern about him carrying around so much money. Bruce has no idea what she’s talking about, and she goes on to explain that he called her from his car and told her to withdraw 20 million dollars and put it all in a briefcase. Bruce is still confused until the man in the Mayan attire appears, snatches the briefcase, and takes off.

In the Batcave, Batman watches the news as Sloan is arrested for embezzlement. He, along with a few others from Veronica’s party, are in hot water over disappearing funds. Bruce is on the list as well, though apparently his loss of money hasn’t resulted in arrest, yet. Noting the connection, Batman decides to seek out Veronica and finds her on a small cruise ship with a large briefcase of her own. He surprises her and offers to help her with her luggage. Veronica is surprised and a bit unnerved in the presence of Batman, but she doesn’t resist. Batman opens the case to find her jewelry, and she’s just as surprised as he is. Then, three men dressed like jaguars board the ship. Batman is able to fend them off, and failing to get the suitcase, they choose to flee. Veronica is confused and angry and decides to take her frustrations out on her little worry men dolls she has pinned in her hair. Batman stops her from tossing them overboard, and instead questions her about them. She tells Batman how she bought them from an english man in the rain forest, and Batman removes the backing on one to find a microchip.

At the Batcave, Batman analyzes the little worry men pulled from Veronica’s hair and determines that the device inside them is intended to hypnotize people when they’re most susceptible to hypnosis – during their sleep. Alfred apologizes for his role in getting Bruce to lose 20 million bucks, but Batman seems unconcerned. He knows there is only one man who could pull off this scheme – The Mad Hatter.

At an old, defunct, costume shop, The Mad Hatter sits with his ill-gotten goods. He’s pretty jolly, until his men return empty-handed. They tell him what happened, and Mad Hatter even notices that Batman was able to tear away a piece of one of their masks which will undoubtedly lead him to their lair. He gets rather angry, but then cheers up remarkably quick. He’ll be ready for Batman.

They should just be happy he didn’t make them put on Alice in Wonderland costumes.

And just as The Mad Hatter predicted, Batman does trace the garment to the old shop. It’s a shop that Batman says has been closed for years, but costumes for recent rogues appear inside including Clayface and Riddler. No matter. Batman enters and confronts The Mad Hatter and soon finds himself being attacked by mannequins of some of his more famous foes. There’s a Penguin-like toy that tries to stab him, a rolling Riddler with a machine-gun, a Harley Quinn marionette, and a giant Joker Jack-In-The-Box with a pretty big knife. The three jaguar men are there as well, and they’re able to over-power Batman allowing for The Mad Hatter to explain his scheme like all villains should. He tells Batman how he was released from Arkham, and determined to start a new life free of crime, he needed money. He used what little he had on this scheme, and he brain-washed the native he met down there to help him (that’s the guy in the Mayan costume). The other three are just gutter-trash, per The Mad Hatter, and with that all out of the way he now wants Batman’s cowl as a parting gift, except Batman won’t let him just take it. 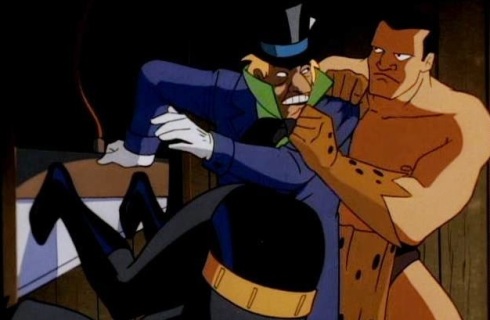 After being booted away by Batman, The Mad Hatter orders his men to put Batman in a nearby guillotine. As the blade falls, Batman uses his legs to stop it and is left in a very uncomfortable and quite precarious position. As The Mad Hatter pushes down on the blade, Batman pulls out some sonic device that, when activated, seems to break the hypnotic spell the other men were under. The jaguar guys, having apparently heard what Mad Hatter called them, attack him. They’re about to do some real damage when the shaman stops them, insisting the police should take care of him. The Mad Hatter thanks his former slave, and then pulls a gun on him that he had been hiding in his rather large hat.

The commotion between The Mad Hatter and his former henchmen provided enough of an opportunity for Batman to escape. It would have been nice to see how he got out of that mess, but maybe it’s also better we didn’t see since that was quite a pickle. The Mad Hatter ventures into the darkness of the storage room to find him, and a Batman mannequin gets sent at him as a decoy, allowing for the real Batman to take him down from behind.

At Wayne Manor, Bruce explains to Alfred what happened after. The man The Mad Hatter encountered and brainwashed in the rain forest was allowed to head home, and apparently Wayne is paying for the tickets. Before he left he gave The Mad Hatter a parting gift, and we’re taken to Arkham to see what it is. As The Mad Hatter tosses and turns in his bed, his pillow is disturbed to reveal a little Batman worry man.

The Shaman’s parting gift for The Mad Hatter.

“The Worry Men” starts off on shaky ground. A rich person being taken advantage of has been done before on this show. At least this time they brought in Miss Vreeland, who is a bit annoying, but also interesting. She represents what Bruce would be if he didn’t care about his family’s legacy and since she at least means well in this episode she’s less a villain than she was in “Birds of a Feather.” I remain surprised at how often The Mad Hatter appeared in season one. He’s not one of my favorites, but Roddy McDowall is so good in the role that it’s hard for me to dislike him. He is a villain with no redemption, which makes it easy to bring him back again and again. That said, this is actually his final appearance as the featured villain of an episode until The New Batman Adventures. He’ll appear in season two with most of the other villains in “Trial,” but otherwise is reduced to cameos.

I will say, this episode does look pretty great. Dong Yang continues to improve upon its prior work and I’m excited to revisit their season two episodes to see if this level of quality carries over. Batman looks especially dramatic in his rooftop battle with the Mayan Shaman, and there are a lot of new characters in this episode and none look short-changed. The lighting in the final act is great, and this one received quite a nice boost from the recent HD transfer.

That puts a wrap on season one. We’ve done 65 weeks of Batman, with still 44 to go so it’s not as if we’re nearing the end. It feels like quite a milestone though, and I’d regret not pausing to mention it. That means that there will still be a lot of Batman in 2019, but also that this feature will end in 2019 as well. This has been fun for me though and I look forward to getting into season two, even though I’ve seen those episodes multiple times as well. I definitely feel less familiar with them though than I do with season one, and we have some good ones still to come so I will see you back here next week for our first episode of season two:  “Sideshow.”

This entry was posted on Friday, January 11th, 2019 at 12:23 am and tagged with batman, dc comics, marilu henner, roddy mcdowall, the mad hatter, veronica vreeland and posted in batman the animated series, Comics, Television. You can follow any responses to this entry through the RSS 2.0 feed.
« Batman: The Animated Series – “Read My Lips”
Batman: The Animated Series – “Sideshow” »

One response to “Batman: The Animated Series – “The Worry Men””