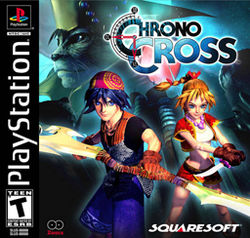 I have been intentionally avoiding the topic of video games of late.  I felt like this blog was getting too video game oriented when it’s meant to capture more.  I think the break has been long enough and so I return to my Greatest Games feature with the latest addition, Squaresoft’s Playstation masterpiece:  Chrono Cross.

Chrono Cross was burdened by hype from the get-go.  One of the most fondly remembered games from the 16 bit era is Square’s Chrono Trigger, the time-traveling RPG that won over many gamers in 1995.  It came late in the Super Nintendo lifecycle and at a time when the RPG was starting to get a bit stale.  It changed things up though thru it’s then innovative battle system and time traveling dynamic which made the game feel extremely fresh.  Those who played it loved it, and those who found out about it much later felt like they really missed out driving the after-market prices of SNES game carts to unexpected heights.  Squaresoft would wisely capitalize on this by re-releasing Chrono Trigger for the Playstation with Final Fantasy IV as part of the Final Fantasy Chronicles compilation.  They would also develop and release a sequel in 1999 called Chrono Cross.

By the time Chrono Cross arrived the fans who had missed out on Chrono Trigger had caught on and expectations were high.  The game was well met by critics when first released, becoming one of only seven titles reviewed by Gamespot to receive a perfect score.  Other outlets were eager to praise the title and it was one of the best reviewed games of 1999 and is still the 8th best reviewed title for the Playstation behind games such as Metal Gear Solid and Gran Turismo 2 and ahead of genre-mate Final Fantasy VII.  Even with all of that praise though, it still feels like Chrono Cross gets overshadowed by the game it followed.  Chrono Trigger has been re-released numerous times for both home consoles and portables.  Chrono Cross, on the other hand, has never been re-released in the US and only recently was made available on the Playstation Network in Japan.  The game sold pretty well, but it didn’t move a real noteworthy amount of units (though most RPG’s don’t).  It feels like the game is still fighting for recognition, even when few are there to put it down.

Chrono Cross is my preferred game of the Chrono series.  That’s not a knock against Chrono Trigger, a truly wonderful and memorable game, but Cross is just a tiny bit better.  The scope of the game is enormous.  There are over 45 characters for the player to recruit and use and a select few have hidden special moves that can be used in conjunction with other characters.  The game encourages repeat playings as it’s impossible to recruit all of the game’s characters in one play-through.  The game’s plot does not take the player across millions of years but it does include parallel worlds.  In an interesting twist, the game’s main character is alive in one world but died as a small child in the other.  In sort of typical Japanese RPG plot-lines, nothing is what it seems and things do get a bit convoluted by the game’s end but it’s an engrossing and worthwhile story to experience.

The gameplay is similar to Chrono Trigger and other Japanese RPG’s, but it is different in several key areas.  Chrono Cross felt remarkably progressive when it first came out as the game did away with genre staples such as experience points and random encounters.  Instead of experience points, characters get progressively better after performing actions in battle up to a certain point.  There’s a cap placed on the player that can only be extended by defeating a boss character and gaining a “star.”  There’s also no magic points, or mana, and these stars serve as a fuel of sorts to summon creatures to aid in battle.  Magic and special abilities are all labeled as elements, and they are one-time use in battle.  If you want your character to cast Aqua Ball twice you simply equip the spell twice.  Each character has an element grid that grows with the character.  Characters have their own unique abilities at certain levels and are free to equip anything else.

A look at the game’s battle scenario. Not bad for a game that’s over 10 years old!

To go along with this element system is a color coded element field.  The field exists on every battle and is comprised of three parts.  There are six element colors that can affect the field and using any of the six adds it to the field and bumps one off.  For example, if three consecutive red elements are used between the player and enemy, then the whole field is red.  Each character has an innate elemental color associated with him or her which makes them more proficient with that color and weak to its opposite.  When the field is in that character’s favor, that character gets a boost in stats and all elements of that color are more potent.

Standard attacks use attack points.  At the onset of a turn, a character has seven stamina points to use.  Using any kind of element uses up seven while physical attacks are tiered and consume 1, 2, or 3 points.  The player can use all seven up on physical attacks or elements.  Elements can be used at any time, but if the player only has two stamina points remaining then he’ll end that turn with negative 5 stamina points which will likely impact the character’s next turn.  It becomes a management tool and sometimes the player will be tempted to go all out and exhaust his or her characters in an effort to deal a killing blow.  And since the element field is affected by everyone who uses elements it affects how the player uses all of the characters in the party (three total).

The battle system encourages tactical thinking, more so than most Final Fantasy games.  And because the roster of available characters is so large it gives the player lots of freedom to swap characters in and out of the main party.  Usually who’s in it will be determined by the environment as it’s good to have an opposite aligned character to deal out major damage, though going too heavy on the opposite element means your characters are more susceptible to the enemies as well.  These kinds of trade-offs are not foreign to gamers, but it works to great effect in Chrono Cross and keeps even the more mundane enemy encounters amusing. 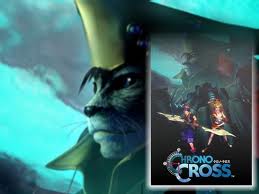 If you’re a fan of the genre and never played this one then you’re really missing out.

As I mentioned earlier, the plot can get a bit murky but overall it’s pretty fun and will keep most gamers entertained.  The game pulls the old switcheroo midway through by having the main character change rather drastically which gives the game a new feel.  The art direction and visuals were quite stunning in 1999 and hold up surprisingly well today.  A lot of games from the Playstation era cannot say the same.  There’s many lush environments, especially early in the game, and there’s liberal use of FMV for the more spectacular moments.  The audio is also fantastic.  Sure the characters don’t talk and it’s a pretty text-heavy title, but the soundtrack is exceptional and one of the best of all time.  Above all, it’s just a fun game.  This is the Japanese RPG perfected and the genre’s popularity maybe well behind us at this point but it’s still fun to go back and relive the classics.  New games are great and all, but there’s nothing like firing up an old classic and if you’re going to play an older RPG, Chrono Cross is the one to reach for.

This entry was posted on Sunday, August 19th, 2012 at 9:18 pm and tagged with chrono series, final fantasy, masato kato, playstation, rpg, squaresoft, yasunori mitsuda and posted in Greatest Games, Video Games. You can follow any responses to this entry through the RSS 2.0 feed.
« TMNT Classic Collection
New Super Mario Bros. 2 »